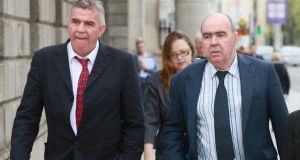 Martin O Donnell and Pat O Donnell, who claim they were assaulted by gardaí during the 2007 protest. Photograph: Collins Courts

A High Court jury has dismissed a claim by a local farmer, Patrick Coyle, that he was  unlawfully assaulted by gardai during a morning protest against the Shell Corrib gas refinery in Co Mayo.

The jury were unable to reach agreement as to whether two other men, fishermen brothers Patrick and Michael O’Donnell, were unlawfully assaulted by gardai during the same protest on January 19th 2007. A disagreement in relation to those two cases was formally entered.

Patrick Coyle, of Barnatra, Ballina, and Patrick and Martin O’Donnell, with addresses at Porturlin, Shore, Ballina, had  separately sued the Garda Commissioner and State for damages, including punitive damages, over alleged unlawful assaults.

After almost four hours deliberation, the jury of seven men and four women returned just before 5pm on Friday when the foreman informed Mr Justice Paul McDermott they had rejected Mr Coyle’s claims and failed to agree a verdict in the case of the other two men.

In their separate civil actions heard together over seven days, all three men alleged the assaults occurred between 7.30am and 8am when gardai were corralling protesters onto one side of the road as a convoy carrying workers to the Shell refinery was travelling on the other side.

The men alleged they were assaulted after a Garda Sergeant gave an order to remove a particular protestor from the crowd. Mr Coyle alleged he was struck in the face by Garda Marvin Lee. He also alleged he was struck in the back of the head as he turned back into the crowd, with the effect he was  knocked to the ground. It was alleged the person who struck Mr Coyle in the back of the head was Garda Peter Lee, father of Marvin Lee.

Gardaí disputed that version of what happened and denied there was any order from a sergeant to take a named protestor out of the crowd. Their evidence was that same protestor created a dangerous situation by crossing over the mid line of the road as the Shell convoy was driving by.

Garda Marvin Lee said he was grabbed by the lapels by Patrick O’Donnell and dragged into a “frenzied” crowd and feared he might be put over the parapet of Bellanaboy Bridge. Garda Lee’s father, Garda Peter Lee, said he used physical force to get his son away from the crowd. Both gardai denied they assaulted any of the three men.

A Garda video which recorded the protest was played to the jury. Some eight minutes of the protest, the period when it was alleged the assaults occurred, was not recorded.

After the jury delivered their verdict, Colm Smyth SC, for the defence, sought his costs of Mr Coyle’s case.

Micheal P O’Higgins SC, for the plaintiffs, asked the judge to note Mr Coyle had suffered an injury and that the court was unaware how close the jury decision in his case may have been. He asked the judge to consider making no order for costs, meaning each side would pay their own. Mr Smyth opposed that application and said the claim had placed the reputations of certain gardai on the line.

The judge said he would award costs against Mr Coyle and adjourned to a later date a decision on costs in the other two cases.