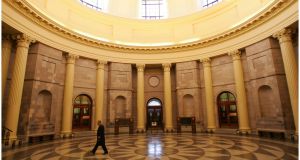 The High Court has ordered the extradition of a Cork man who was the ‘controlling mind’ behind a £20m tax scam. File photograph: Bryan O’Brien/The Irish Times

The High Court has ordered the extradition of a Cork man who was the “controlling mind” behind a £20 million (€23 million) tax scam and who is now wanted in the UK for failing to pay a confiscation order amounting to almost £13 million (€15 million).

He also argued that to imprison him would breach his fundamental rights under the European Convention of Human Rights. It was also submitted that, as Mr O’Connell is currently “indigent”, or poor, he should not be surrendered to serve a penalty where a rich person would not have to do so.

“This court is satisfied that there is no basis for refusing his surrender or referring his case further to the Court of Justice of the European Union,” she said.

Ms Justice Donnelly also said the High Court can only refuse to surrender someone “where there is a real risk that his rights cannot be protected or were not protected in the issuing state because of a defect in the system of justice there such that it would be egregious to surrender him”.

Mr O’Connell was convicted in Middlesex Guildhall Crown Court on August 9th, 2000, for five offences of Vat evasion between August 1st, 1996 and March 25th, 1999. He was subsequently jailed for eight years but released in March 2003 on licence.

It also heard that, by September 2016, this confiscation order had a balance outstanding of nearly £6 million plus accrued interest of more than £5.8 million (€6.68 million). Mr O’Connell was subsequently arrested in 2017 on foot of a European arrest warrant issued by the UK authorities.

The warrant, the High Court heard, stated that because Mr O’Connell failed to pay the confiscation order in full by May 2004, his default sentence was activated and his extradition was being sought so that he could be returned to prison in order to serve this part of the overall sentence.

The warrant, issued by Westminster Magistrates Court in London in 2016, outlined Mr O’Connell’s involvement with five companies all of which became “missing traders” and for all of which he was acting as the “controlling mind”.

It stated that the five companies all failed to submit a Vat return and/or failed to account for any Vat to Her Majesty’s Customs & Excise during periods when their trading was substantial.

At an earlier hearing, Dr Michael Forde SC, for Mr O’Connell, said there was not “a snowball’s” chance on the evidence that his client could make any payment on the confiscation amount.

“The £13 million that he is now expected to pay and the detention for failure to pay it is grossly disproportionate.”

The High Court heard the father of three would make an application to appeal the extradition order on Wednesday.