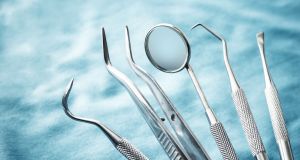 The patient had complained to the Dental Council he suffered severe pain as a result of how Dr Liam O’Droma, of Harbour Road, Howth, Co Dublin, carried out the procedure in late 2014. File photograph: iStock

A dentist has had conditions attached by the High Court to his registration over professional misconduct in persisting for an excessive time in trying to fit a patient with a denture.

The patient alleged the procedure went on for more than five hours but Dr Liam O’Droma disputed it lasted that long. A fitness to practice inquiry concluded it lasted an “excessively long period” of time.

An implant specialist told the inquiry Dr O’Droma should have known the procedure would not succeed due to the angulation between the implant and a tooth, should have either stopped it or got assistance, and his conduct fell short of the standards required.

The patient had complained to the Dental Council he suffered severe pain and suffering as a result of how Dr O’Droma, of Harbour Road, Howth, Co Dublin, carried out the procedure in late 2014.

He told the FTP inquiry the dentist made multiple attempts to fit the denture, leaving his mouth bruised, cut and very sore. He also claimed the procedure went on for some five and a half hours before the dentist told him to come back the next day. The patient said he lost confidence in the dentist and ultimately underwent remedial treatment in England.

The dentist made a number of admissions and, arising from those and the evidence, the inquiry made two findings of professional misconduct. Those concerned Dr O’Droma’s performance of the implant procedure and his keeping of inadequate clinical notes in relation to consultations and interactions with the patient over several dates earlier in 2014.

The criticism of the notes included they gave no indication of a consent procedure involving the patient or that the patient had undergone other procedures. The implant specialist described them as “highly unsatisfactory” for reasons including there was no documentation in relation to critical issues that occurred during the patient’s treatment.

The Committee also found as proven beyond reasonable doubt an allegation the dentist had, on either of two dates in June 2014, administered four or six Temazepan tablets instead of Dexamethansone tablets to the patient. No claim of professional misconduct was pursued in relation to that allegation, described as an isolated incident, and which the dentist accepted amounted to “sub-optimal” conduct.

The FTP committee noted a range of factors in mitigation of sanction, including the dentist was “forthright” about the errors he had made. It also said his conduct of the implant procedure, though “plainly misguided” was ultimately directed at ensuring a better outcome of the patient.

It noted he has an otherwise unblemished record over 50 years and has completed some courses directed to the issues raised in the inquiry and is undertaking more. Several testimonials from other dentists were also provided on his behalf.

JP McDowell, solicitor for the Dental Council, applied to the High Court this week for imposition of conditions on the dentist’s registration as recommended by the Council.

These include agreeing to an audit of his practice, with a specific focus on clinical record keeping and the safe keeping, prescribing and dispensing of medicines. They also include the appointment of an appropriate person to act as a mentor to Dr O’Droma over a two year period in respect of his prosthodontics and implantology practice. The conditions also require the dentist to undertake and complete such courses as directed by the Council.

The president of the High Court, Mr Justice Peter Kelly, said he was satisfied on foot of the evidence there was no reason to depart from the sanction recommended by the Council and would make the orders sought.