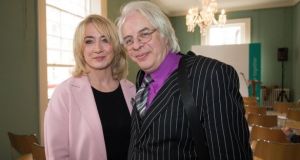 If approved, the personal insolvency arrangement will see Frank McNamara and his wife Theresa Lowe write off €2.9m of debt and allow them keep their family home in Dunshaughlin, Co Meath, valued at €550,000. File photograph: Tom Honan

In a judgement last August, Mr Justice Denis McDonald said he was minded to approve the arrangement but wanted certain matters, including discrepancies in documents filed by Mr McNamara concerning his inheritance from his parent’s estate, clarified.

If approved, the PIA will see the couple write off €2.9m of debt and allow them keep their family home in Dunshaughlin, Co Meath, valued at €550,000.

Tanager’s debt is secured against the couple’s home. They also owes money to parties including Bank of Ireland, Banco de Sabadell SA and the Revenue.

He wanted solicitors for the estate to clarify by letter it is not seeking any money from Mr McNamara in respect of rental income he received for a property he and his sister inherited following their father’s death a decade ago.

The matter was adjourned for a week to allow Mr McNamara’s representatives obtain that letter.

Earlier on Monday, Rudi Neuman Shanahan BL, for Tanager, raised an issue about Mr McNamara’s use of his €800 monthly share of rental income from his inheritance.

Mr McNamara, since seeking the PIA in 2016, has paid his share of the rental income into a solicitor’s account which monies, about €30,000, are to be used for the benefit of the creditors, the court heard.

Before 2016, Mr McNamara used that income for his own purposes and it could be the case that income, estimated to amount to a total €62,000 is owed to the estate of Mr McNamara’s late father, counsel said.

If the estate considered those monies are due to it, the PIA would not allow the couple return to solvency, counsel said. Keith Farry BL, for the couple, said issues over the inheritance had been explained in a sworn statement by Mr McNamara.

In one document, Mr McNamara had given a gross figure for the total value of his late father’s estate of approximately €500,000 while a second document stated his share of the estate was worth an estimated €181,000.

The first document did not take into account Mr McNamara was only a co-beneficiary of the will and that costs such as legal fees and donations to charities had not been taken out of the gross value of the estate, counsel said.

Mr Farry added he believed it will be possible to obtain the requested letter from the estate’s solicitors shortly.

Mr McNamara (59) worked as musical director on the Late Late Show for 20 years while Ms Lowe (56), was a TV presenter before qualifying as a barrister.

Under the proposed PIA arrangement, which will see the couple return to solvency, they will continue to make payments on their mortgage to Tanager.

The PIA will be funded by Mr McNamara’s inheritance from his late father’s estate and from the sale of five acres in Co Meath.

His inheritance, which includes his share in his parent’s home, was initially estimated at just over €180,000 but, due to an increase in property values since 2016, it is now estimated at €250,000, Mr Farry said.

Mr McNamara has also obtained some work doing music at funerals and some of that extra income will go to creditors.