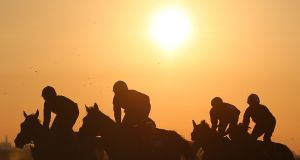 A man who has written a book about his experiences working at Coolmore Stud has asked the High Court for injunctions restraining the stud from seeking to frustrate sales of his book.

William Jones, author of The Black Horse Inside Coolmore, claims Coolmore Stud is engaging in a “flagrant” abuse of his right to freedom of speech according to the Constitution and European Convention on Human Rights.

He told Mr Justice Paul Gilligan that solicitors for Coolmore had written to the Amazon website and various bookshops referring to potential proceedings for defamation in relation to the book and seeking that it be withdrawn from sale.

Mr Jones, who denies any defamation, said, since his book was published last November, he has made repeated requests to Arthur Cox, solicitors for Coolmore, to precisely outline the alleged defamation. That had not been done, he claims.

Representing himself, Mr Jones, of Cashel, Co Tipperary, told the judge he wanted an interim ex parte injunction (one side only represented) restraining any efforts on behalf of Coolmore Stud to frustrate sales of his book. The matter was urgent because it was affecting sales, he said.

In his proceedings, he also wants a declaration the book is not defamatory on its face and may be sold in outlets where books are sold.

Mr Justice Gilligan said, in circumstances where there was no court order restraining sales of the book and where Mr Jones had provided a very long affidavit setting out allegations against Coolmore, he believed the court should not hear the application for the interim order ex parte.

He directed Mr Jones to put the other side on notice of the injunctions application and said he would deal with it on Monday, April 25th.

Mr Jones worked at Coolmore from 2006 until January 2015 and wrote about some of his experiences in his book, self-published last November by his company, Gold Rush Publications.

On November 26th, he received a letter, via email, from Arthur Cox, solicitors for Coolmore Stud, alleging the book was defamatory of their client, instructing him to cease its distribution and sale and reserving the right to take legal action against him without further notice, Mr Jones said in an affidavit.

In his November 27th reply to Cox’s, he had said what he had written was “the truth” and he was ready to defend any leal action against the book, “line by line if necessary”.

He said he had continued to sell the book through bookshops which had not been threatened and via his own website.

Mr Jones said he sought details of the alleged defamation and last December received a letter from the solicitors mentioning matters relating to the death of two horses which he had referred to in his book.

In his reply, he said he repeated his assertion the book was not defamatory and told the solicitors he held the defendant responsible for any loss of sales by their actions in relation to bookshops.

In letters to bookshops, the solicitors sought confirmation the bookshops would not sell or distribute the book in the absence of Mr Jones “complying with his legal obligations on confidentiality to our client and ensuring that the book does not contain any defamatory material”.

The defendant had provided no specific details explaining what that statement was referring to and he considered the letters an attempt to “bluff” bookshops into keeping the book out of circulation, he said.

Articles about his book had appeared in newspapers and magazines and none of those had received legal correspondence on behalf of Coolmore, he added.