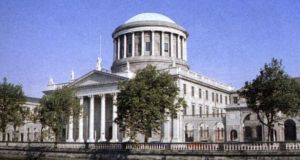 Mr Justice Peter Kelly said with the final lump sum payment the Pattersons could say farewell to the Four Courts.

The President of the High Court has said it is “really shameful” legislation has not yet been introduced to allow periodic payments to the catastrophically injured who settle their medical negligence actions.

Mr Justice Peter Kelly made his comments as he approved a final €8 million lump sum payment for Jamie Patterson (13) who had sued the Coombe Hospital over the circumstances of his birth.

He has cerebral palsy with spastic quadriplegia, is not able to talk and can only communicate through facial expressions and body language. This final lump sum payment brings to €9.8million the total paid out to him.

The settlement in the case was without an admission of liability.

The judge said quite clearly Jamie Patterson’s mother was tired and worn out and this was the third case in three weeks where the parents of catastrophically injured children have asked for a final lump sum payment to end the litigation.

The judge’s remarks came after Jamies’ mother Teresa Patterson told the court she wanted to leave the court and not look back.

“I feel I am so tired. Jamie is tired of all this; he just wants to play,” she said, explaining that for every court date, her son had to endure examinations by medical experts on both sides.

Mr Justice Kelly said with the final lump sum payment the Pattersons could say farewell to the Four Courts.

He said mediation should be used, particulary in these type of medical cases where it is bruising on both sides.

Ms Patterson told the court her son is a beautiful boy who has an amazing outlook on life even though he faces many challenges every day of his life.

“We had no choice but to got through a huge legal battle to try and get the best quality of life possible for Jamie,” she said.

“Jamie has gone through so much in his 13 years, medical procedures, pain, constant appointments and he still has a big smile on his face. I want to leave court today and not look back. We need to move forward for Jamie. Tomorrow we start a new chapter.”

She said the family now wanted to “leave the difficulties and stress of litigation behind.”

Jamie Patterson of Mountdown Park, Terenure, Dublin had, through his mother Teresa, sued the Coombe Hospital for alleged negligence at the time of his birth in November 2002.

In a statement, the Department of Justice said the Civil Liability Amendment Bill is “is currently being drafted to allow courts to make provision for periodic payment orders in circumstances where lump sums are currently awarded as a consequence of individuals suffering catastrophic injury because of the alleged negligence of another”.

“The bill is due to be published in the coming months,” a spokesman added.