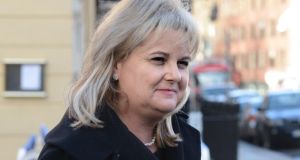 Former Rehab chief executive Angela Kerins was assailed by “a pack of parliamentary vultures” when the  Dáil’s  Public Accounts Committee (PAC) was investigating State funding of the organisation, her lawyer has told the High Court. Photograph: Cyril Byrne/The Irish Times.

Former Rehab chief executive officer Angela Kerins was assailed by “a pack of parliamentary vultures” when the Dáil’s Public Accounts Committee (PAC) was investigating State funding of the organisation, her lawyer has told the High Court.

Ms Kerins suffered “devastating” injuries as a direct consequence of questioning of her by PAC on February 27th, 2014, John Rogers SC said.

Counsel made the remarks when applying to Ms Justice Isobel Kennedy for an order for discovery of documents sought by Ms Kerins for her action against the PAC.

In these judicial review proceedings, Ms Kerins wants various declarations and orders, including one restraining the PAC further pursuing the examination of Rehab’s accounts insofar as they relate to her employment with the organisation.  She is also seeking damages.

The action is against the members of the PAC including the chairman, John McGuinness TD; the clerk of Dáil Éireann; the clerk of the PAC; Ireland; and the Attorney General.

Ms Kerins claims the PAC has conducted itself unlawfully, showed bias towards her, acted outside its remit, and has committed a malfeasance in public office.

Mr Rogers said in advance of attending the February 27th PAC meeting, Ms Kerins had already made a public statement disclosing her salary and was still subjected to questioning about it at the meeting.

What unfolded at the meeting was “an excoriating examination” by members of PAC in which a number of references were made about Ms Kerins, including her “being stubborn and the like”, counsel said.

As a result, she was “injured and degraded and suffered a significant health setback”, he said. “When I say significant, I mean devastatingly significant injuries.”

Counsel said Ms Kerins was hospitalised in early March, initially in Waterford and later in the Beacon in Dublin. Mr Rogers said he did not want to get into the detail at this stage but when the case came to full hearing, the injuries would be fully particularised and “it will be quite clear the injury was devastating”.

The PAC invited her to return before it on April 10th but she informed them she was unfit to attend. That April 10th meeting went ahead, attended by a number of other people, including the chairman of Rehab, counsel said.

The transcript of that meeting will show, despite the fact Ms Kerins was unable to attend and had informed them she was sick, what happened “can only be described as an assailing of a citizen by a pack of parliamentary vultures.”

It took Ms Kerins some weeks to come to terms with what had happened and between the first and second PAC meetings she resigned from her post.

Through her solicitors, she wrote to the Dáil’s Committee on Procedures and Privileges (CPP) complaining about the manner in which the PAC had dealt with her and the bias shown against her. Among her claims were the PAC had no power to investigate the expenditure of monies by a private organisation like Rehab and no power to report on private matters relating to her employment, counsel said.

Ms Kerins was also claiming PAC was attempting to bully her and to get the chairman of Rehab to ultimately put the blame on her.  “It was nothing short of a bullying exercise”, Mr Rogers said.

Paul Gallagher SC, for the defendants, who deny the claims, opposed the application for discovery of documents saying they were not required for Ms Kerins’ case.

The hearing of the application was adjourned to resume next week.