Angela Kerins had ‘bizarre belief’ her death would resolve controversy 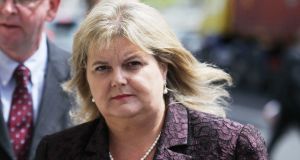 Former Rehab chief executive Angela Kerins who has begun a legal action over her treatment by the PAC. Photograph: Collins

The former chief executive officer of the Rehab charity, Angela Kerins, has told the High Court “bullying and harassment” of her was led by politicians on the Dáil Public Accounts Committee (PAC) and resulted in her becoming convinced “my death would solve the problem”.

She felt “really forced” into a decision to end her life by March 14th, 2014, two weeks after she appeared before a meeting of the PAC on February 27th, she said in a sworn statement.

At that point, she said she was struggling to see a way through for either Rehab or herself and became “irrationally convinced” the solution “was for me to sacrifice myself”.

“I had a bizarre belief that, if I was off the planet, the Rehab Group and everyone else close to me would be saved, my death would resolve the controversy which the Rehab Group found itself in, and would also protect my family from further fall-out from the PAC.”

She said that on March 14th, 2014, she “sadly wrote notes to my family explaining the need to do this” before consuming a “large quantity” of pills and some alcohol.

Because a colleague had become concerned about an earlier phone call with her, this colleague got assistance to break into her home and found her. She was taken unconscious to hospital where she was discharged the following day.

“I was very angry with myself that I had not succeeded.”

As a result of her experiences before PAC and attendant media coverage, her whole world had “turned upside down” and she resigned as Rehab ceo in August 2014.

The PAC “set out to destroy me” and that was not in the public interest, she said.

What she experienced was a “McCarthyite witchhunt”. She lost her job, her career, was “deeply humiliated” and still felt a “deep sense of hurt”. She had joined the Rehab group in 1992, was appointed its ceo in 2006 and her work “meant everything to me”.

John Rogers SC, representing Ms Kerins, read her affidavit at the opening of a hearing concerning the jurisdiction of PAC to question Ms Kerins. This issue is central to her case over her treatment by the PAC. Her action includes a claim for aggravated damages.

Ms Kerins alleges PAC unlawfully subjected her to a “vicious onslaught” and had no power to question her about issues including payments by Rehab group to herself.

The hearing is before a three-judge court comprising the President of the High Court, Judge Peter Kelly, and Judges Seamus Noonan and Isobel Kennedy.

Transcripts of PAC hearings concerning Ms Kerins from February and April 2014 were read to the court during yesterday’s (Tuesday’s) hearing. When the court queried if they would see video recordings of the hearings, Mr Rogers said they lasted seven hours but he would consider the issue overnight.

Earlier, Mr Rogers said a Sunday Independent article by Independent TD Shane Ross saying Ms Kerins had refused to reveal her “vast pay check” during an RTÉ interview set the “tone” in early 2014 for a “growing orchestration” of material “negative about her personality and character”.

Mr Ross was a member of the PAC that later subjected Ms Kerins to impermissible questions about matters not its business and outside its jurisdiction, counsel said.

After the PAC meeting of February 27th 2014, she was overwhelmed by the committee’s disposition towards her and the effects of the “media storm”, he said. On March 2nd, she collapsed and attended her GP in Waterford who had her admitted to Whitfield Clinic under the care of a gastroenterologist who referred her to a psychiatrist.

“Regrettably, on March 14th, she self-harmed and became unconscious in her own home and had to be rescued for her life.”

The PAC, counsel argued, had in recent years “orchestrated a different mode of operation” characterised by a willingness to depart from a rule it should not, and was not permitted to, delve into personal and private affairs of companies, individuals, enterprises or charities.

A letter from the PAC dated February 18th 2014 gave more details of the nature of the inquiry scheduled for February 27th, he said. Before that letter, Ms Kerins met privately with PAC chairman John McGuinness and understood certain parameters would apply at the PAC hearing but they did not.

During the “hostile” February 27th meeting, she was re-examined and cross-examined about her salary, pension and bonuses and other “wholly private and irrelevant” matters including about her husband’s company and matters concerning former Rehab ceo Frank Flannery, Mr Rogers said.

The basis for the PAC sitting was to consider payments by the HSE and Department of Justice to Rehab and there was no entitlement to question a private body about payments by it to its executives or anyone else, cousnel said. The tone of the questioning was that Ms Kerin was being “paid too much”.