Dundon will not give evidence in his trial for murder 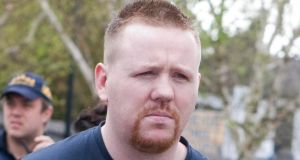 John Dundon who is on trial for the murder of Garryowen player Shane Geoghegan in 2008.

The prosecution has closed its case in the trial of Limerick man John Dundon, who is accused of murdering rugby player Shane Geoghegan almost five years ago.

The non-jury court heard today that the State case had now closed and that the trial had entered the defence stage. The three judges were told that Dundon would not be called to give evidence but that his legal team was planning to call other witnesses.

The 30-year-old of Hyde Road in Limerick is on trial at the Special Criminal Court, where he has pleaded not guilty to murdering the Garryowen player on November 9th, 2008.

Mr Geoghegan was shot dead in a case of mistaken identity as he returned home to his girlfriend in Dooradoyle, Limerick around 1am that morning. The 28-year-old died of gunshot wounds to his head and trunk just metres from his home at Clonmore, Kilteragh.

The trial has heard from two sisters, Lisa and April Collins, who testified that they heard Dundon plan the killing of another man, John McNamara, shortly before Mr Geoghegan was murdered.

April Collins also testified that Dundon panicked when he heard that the wrong man had been killed just hours after Mr Geoghegan was shot dead.

Brendan Nix SC, defending, said he planned to call two witnesses, who are in the custody of the State: Nathan Killeen and Liam ‘Lika’ Casey. After checking with the relevant authorities, it was confirmed that they would give their evidence yesterday.

Mr Nix had also made a request to recall April Collins to put another question to her. However, the judges did not allow this.