Drunk-driver who ‘pulled in for rest’ validly arrested 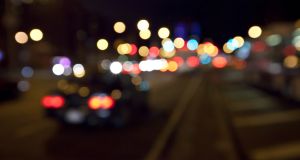 The driver did not initially wake up when the garda knocked on the window. File photograph: Getty Images

The Court of Appeal has held that a drunk-driver who “pulled in for a rest” was validly arrested despite claims by his lawyers that the garda who arrested him had not satisfied herself of his future intentions.

The man, who cannot be identified for legal reasons, was convicted in Sligo District Court of being in charge of a car in a public place with intent to drive while intoxicated contrary to section 50(4) of the Road Traffic Act as amended.

At approximately 4.10am on February 13th, 2011, Garda Andrea McGovern was patrolling the Ballydrehid area of Co Sligo when she observed a car pulled in on the side of the road. The lights were on, a person was sitting in the driver’s seat and the keys were in the ignition.

The driver did not initially wake up when the garda knocked on the window. When he eventually woke up, and was asked why he was parked on the side of the road. He said he was heading home from a Christening, had been drinking all day, had become tired and had therefore pulled in for a rest.

Garda McGovern gave evidence of having formed the opinion that the driver had consumed an intoxicant to the extent that he was rendered incapable of having proper control of a car.

The man’s barrister, Keith O’Grady, asked for a direction at the close of prosecution’s case, submitting that the arrest was unlawful and that there was no evidence in relation to intent to drive or intent to attempt to drive.

On the contrary, he said, the conversation between the garda and the then accused related to why he was on the hard shoulder. No inquiry was made as to his future intentions and no attempt was made to ascertain what he intended to do, counsel submitted.

In the Court of Appeal, the man’s barrister, Niall Flynn, submitted that the garda had not satisfied herself of the three elements of the offence.

The man was convicted, he appealed his conviction and the Circuit Court judge who heard the case sought the Court of Appeal’s opinion in a “case stated”.

In answering the question posed on Thursday, Mr Justice John Edwards said there was ample evidence for the court to conclude that the arresting Garda was entitled to effect a valid arrest under section 50.

The judge said the driver told the garda that he had pulled in for a rest which implied that when the rest had been availed of the previous activity of driving would resume.

He said the driver was told by Garda McGovern that she was arresting him for being “drunk in charge”, that being the label that is habitually applied to offences under section 50 of the Road Traffic Act.

The judge said the question posed to the Court of Appeal must be answered in the affirmative. Mr Justice George Birmingham and Mr Justice Garrett Sheehan said they agreed with the judgment.