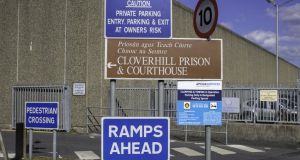 The accused, who made no reply when charged, faced his second hearing on Thursday when he appeared before Judge Blake at Cloverhill District Court. Photograph: iStock

A man charged with the murder of a woman and two children at their Dublin home has been further remanded in custody pending formal directions from the Director of Prosecutions.

A request was made by lawyers for The Irish Times, RTE, INM, the Mail Group, The Star and The Sunday Times to be allowed make an application to lift the reporting restrictions in the triple murder case at Cloverhill District Court on Thursday.

However, Judge Victor Blake refused to alter the existing order and said an application could not be heard until the defence and the chief prosecution solicitor at the office of the Director of Public Prosecutions (DPP) had been put on formal notice.

Gardaí began a murder investigation following a postmortem into the deaths last month.

They arrested a man in his 30s on Saturday morning and charged him with three counts of murder. He was remanded in custody on Monday by Judge Anne Watkin at Dun Laoghaire District Court.

Evidence of arrest, charge and caution was given by Detective Sergeant John White. He told Judge Watkin that section 252 of the Children Act applied because two of the injured parties were juveniles.

The Court of Appeal’s recent interpretation of that part of the legislation was that anonymity can also apply to deceased children who were crime victims.

Judge Watkin had told the media on Monday there were reporting restrictions.

The accused, who made no reply when charged, faced his second hearing on Thursday when he appeared before Judge Blake at Cloverhill District Court.

Defence counsel Morgan Shelley told the court he had spoken with the prosecution and there was consent to an adjournment until December 16th.

Judge Blake remanded the man in continuing custody until that date and he said formal directions from the DPP must be obtained. Counsel said preparation of a book of evidence could take some time.

The accused did not address the court but nodded in agreement when asked if would prefer to appear via video-link at his next hearing.

Tom Murphy BL, for the media, asked the judge to lift the reporting restrictions, also possible undersection 252 of Children Act where the court is satisfied it is in the interest of the child.

The defence barristersaid this was the first his client had heard of it, and his instructing solicitor Phelim O’Neill had not been given any formal notice.

If there were to be a “collateral attack” on the decision of Judge Watkin, that should be made on seven day notice, and formally served on the accused and the chief prosecution solicitor, he argued.

Mr Shelley said the defence learned about it informally and it was “a totally unacceptable situation to be ambushed like this”.

The defence barrister also said he was aware the prosecution had received a two paragraph letter about the request from the media.

State solicitor Derek Mangan agreed with the defence and said an email from RTE had been received on Wednesday at 4.45pm.

Counsel for the media said it was not conceded that the defendant needed to be on notice, and added that the State had been contacted. If the court wished it to be done in a notice of motion by way of affidavit so be it, Mr Murphy said.

“It is for the court to state what is in the interest of child victims,” he submitted.

Judge Blake said he was aware of the Court of Appeal ruling. He was not disposed to change his colleague’s order. It was up to the the media if they wished to bring a notice of motion, he told Mr Murphy.