Man squatting at asylum centre had €500,000 in his account, court told 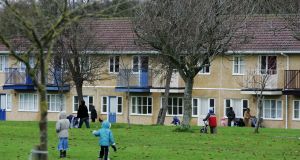 The court heard the accused was ‘squatting’ at the Mosney refugee reception centre in Co Meath. Photograph by Frank Miller

A 40-year-old man who was “squatting” at an asylum centre while he allegedly had access to €500,000 has been refused bail on charges related to a money laundering investigation.

John Sankeni, with no fixed address, appeared before Judge John Lindsay at Dublin District Court on Friday following his arrest by members of the Garda National Economic Crime Bureau.

He faced two charges of theft of €4,500 and €1,500 from a Greek Shipping company at a bank in west Dublin on July 7th, 2016. He also had a connected charged for failing to give gardaí his correct address.

He was arrested on Thursday as he attended the offices of the Garda National Immigration Bureau in Dublin city-centre in relation to immigration matters.

He was then brought to Irishtown Garda station where he was charged.

Garda Sean Byrne said the accused replied “Okay” after each charge was put to him. Further charges in relation to money laundering will be brought, Garda Byrne said.

He objected to bail citing concerns the accused was a flight risk and had access to €500,000 in a bank account.

The garda said the accused provided one address but he had not lived there for 10 years.

Defence solicitor Tony Collier pleaded for bail and said his client had lived in Ireland for 10 years.

The accused instructed his solicitor he had been in receipt of social welfare payments which obtained at a post office in Lucan.

However, the prosecuting garda said there was no record of that. He agreed the man had just €7 cash on him, as well as a bank card, when arrested.

Another home address in Swords in north Co Dublin was given. The court heard he claimed he had lived at the Mosney direct provision centre in Co Meath. However, it had no record of the man, the court was told.

Mr Collier told the judge his client had been living there unofficially and he was “squatting” at the centre because his partner lived there.

He said Mr Sankeni had not been charged with money laundering offences and he argued that it was premature to deny bail at this stage.

Legal aid was granted to the accused, who did not address the court and has not yet indicated a plea.