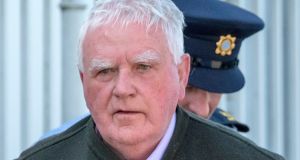 Ted O’Donoghue, from Killmoreen, Kildimo, Co Limerick who has been charged with shooting his neighbour John Hayes and killing his dog Lassie. Photograph: Press 22

A feud between two farmers over a small dirt track linking their farms, led to one man shooting the other and killing his dog, a court was told on Saturday.

Despite strenuous Garda objections to bail, judge Marie Keane, remanded Mr O’Donoghue in custody with consent to bail on a number of “very strict conditions”.

During the bail hearing, Garda Jason Mitchell, from Newcastle West Garda station, said the accused “allegedly fired a shot” from a single barrel shotgun at Mr Hayes, “wounding him in the right shoulder”.

He told the judge the “serious incident” was linked to a “dispute over a ‘right of way’”.

Garda Mitchell alleged gardaí had been called to lands at Ballycasey on “five occasions since June 2014”, and that the shooting last Friday, was the “latest in an ongoing long running feud over a ‘right of way’”.

The court heard the “right of way” is on Mr O’Donoghue’s land, but three other landowners, including the injured party need to access it to get to their lands.

Objecting to bail gardai said they feared Mr O’Donoghue might interfere with witnesses.

Inspector Alan Cullen said the matter should never have come before a criminal court, and that “it’s an unfortunate scenario”.

He said the dispute should have been resolved but had now escalated.

William O’Donoghue, the accused’s brother, alleged the dispute had been running for seven or eight years”.

He told the court tensions would “flare up” from time to time.

William O’Donoghue gave an undertaking in court, to act as surety for his brother, and to monitor his movements whilst on bail, including chaperoning him to Mass services outside the locality.

He also agreed to manage the day-to-day running of the family farm at Ballycasey, where his brother allegedly shot and injured father of four John Hayes, and fatally wounded Mr Hayes’s dog Lassie.

Remanding Mr O’Donoghue on bail, the judge ordered that €3,000 of an independent cash surety of €5,000 be lodged.

She warned Mr O’Donoghue: “If you breach any of these bail conditions you will be arrested and incarcerated.”

Granting bail, the judge noted it was a “very busy time of the year” for farmers cutting silage.

The accused agreed to strict bail conditions, including that he stay away from his farmland at Ballycasey.

He also agreed to hand over management of the farm to his brother William; to sign on daily at Newcastle West Garda station; obey a (10pm-8am curfew); and be available to gardaí at all times,

He also agreed not to contact Mr Hayes nor any other witnesses nor adjoining landowners at Ballycasey.

“If you see your neighbours, you blank them; you don’t even look at them,” the judge told the accused.

The judge described the matter as “very serious” and she remanded Mr O’Donoghue to appear before Limerick District Court on June 21st.