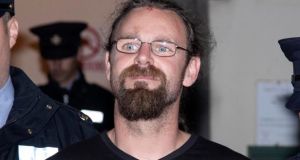 A 43-year-old man charged with the murder of Detective Garda Colm Horkan was deemed unfit to attend a court sitting by video link in Castlerea, Co Roscommon on Friday morning.

Mr Silver is receiving medical attention, according to documentation received by the court from the Central Mental Hospital.

Harristown Court heard that Mr Silver, a mechanic with an address at Aughaward, Foxford, Co Mayo, had been transferred from Castlerea Prison but confusion arose as to his whereabouts. He had been remanded in custody to Castlerea Prison on Friday, June 19th after he was charged.

Det Gda Horkan, who was based in Castlerea Garda station, died at the junction of Main Street and St Patrick Street in the town just before midnight last Wednesday.

Solicitor for Mr Silver, Gearoid Geraghty, said he had on Friday morning received an email from the governor of the Midlands Prison in Portlaoise to say that Mr Silver would not be present via video link and that a sick note would follow. He said he did not know why the accused was being treated at the Central Mental Hospital and was “anxious” to know why he was being detained there.

During proceedings, Judge Alan Mitchell received a note from the administrator of the Central Mental Hospital which clarified the situation. Judge Mitchell said: “It is clear that he is unwell and unable to attend the court today.”

Mr Geraghty requested that legal aid be extended to cover a consultant forensic psychiatrist to produce a report in relation to his client’s fitness to plea.

Judge Mitchell remanded the accused in custody to appear before Harristown Court, Castlerea, via video link on Friday, July 10th. He also extended legal aid for a psychiatrist’s report and requested that an up-to-date medical certificate be made available by the remand date.