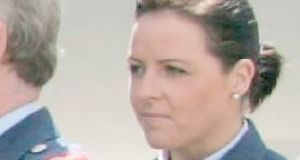 Former Irish Defence Forces member Lisa Smith, who was charged with membership of the terrorist organisation Isis, has been further remanded in custody for a book of evidence to be completed.

She was sent back to Ireland along with her daughter, aged two, from Turkey on December 1st, but was refused bail three days later following strenuous objections that she had been radicalised and joined the Islamicist terror group.

The Co Louth woman denies the allegations and claimed she went to live in the declared Islamic State, and was following teaching of the Koran, after a period in her life when she had suffered severe depression and was suicidal, Dublin District Court was told.

Her lawyer had pleaded that the 37-year-old had come back to Ireland after walking with her daughter “through bombs, poverty, and cesspit camps, and desert, to come to her country of origin”.

She was refused bail on a number of grounds, and was remanded in custody to appear again at Dublin District Court on Wednesday to be served with a book of evidence. Possible further charges are contemplated.

If convicted, she faces a maximum 10-year sentence. The Director of Public Prosecutions has directed trial on indictment.

Wearing a black traditional abaya robe with her face uncovered, Ms Smith, who has been held at Limerick Prison, did not address the court.

Judge Daly said the case was listed for service of a book of evidence, but a State solicitor confirmed it was not yet ready. A four-week adjournment was sought.

Defence barrister David Leonard, instructed by solicitor Darragh Mackin, consented and asked if his client could appear via video-link from Limerick Prison on the next date.

Judge Daly agreed and ordered that the video-link hearing would take place on January 8th next.

Her legal team have asked for her to be segregated from the rest of the prison population while on remand.