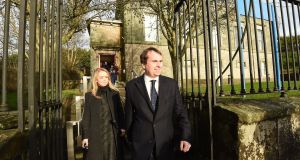 A Cavan/Monaghan TD was remanded on bail when he appeared at Carrickmacross District Court on Wednesday on two charges relating to an incident at his family-owned licensed premises in Ballybay on August 23rd last.

Sean Conlan of Main Street, Ballybay, was present in court when the charges were read out by Inspector Kevin Gavigan, Carrickmacross, who was prosecuting.

Mr Conlan was charged under Section 11 of the Firearms Act for the alleged use of a glass during the pub incident and also with unlawfully assaulting and causing harm to Enda Duffy of Annahia, Ballybay, Co Monaghan, under Section 3 of the Non Fatal Offences Against the Persons Act.

The garda inspector told Judge Denis McLoughlin that photographs were available in relation to the injury sustained by Mr Duffy who suffered a severe cut to his arm from a glass and required a number of stitches, following the incident.

Counsel for the defence Claire McQuillan, who was instructed by McGuill and Co Solicitors, Dundalk, said they were seeking full disclosure by the gardaí of statements relative to the prosecution case.

Judge McLoughlin directed that all necessary documentation be forwarded to Mr Conlan’s defence team and adjourned the case until a further hearing on January 27th next at Carrickmacross.

Granting a remand on his own bail of € 100, the judge also directed that Mr Conlan must have no contact whatsoever with the alleged victim of the assault prior to the next court appearance.

Mr Conlan, who resigned from Fine Gael last month, did not speak during the ten- minute hearing but remained standing in the body of the courtroom before making his exit, accompanied by his legal team.