Shelbourne hotel paintings appeared to have been slashed or torn, court hears 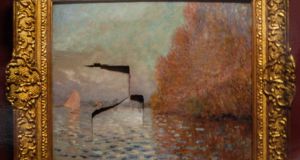 Andrew Shannon has pleaded not guilty to damaging a Claude Monet painting, ‘Argenteuil Basin with a Single Sail Boat’ (1874), at the National Gallery of Ireland on Clare Street on June 29th, 2012.

A jury in the trial of a man alleged to have damaged two paintings in the Shelbourne hotel has heard that the art works will be destroyed.

Andrew Shannon (50) of Willians Way, Ongar, Dublin 15 has pleaded not guilty at Dublin Circuit Criminal Court to damaging the two paintings – Morning Strand and Evening Strand by Felim Egan – at the Shelbourne hotel in Dublin on January 8th, 2014.

The court heard these two paintings, which have been made exhibits in the trial, appeared to have been slashed or torn.

Mr Shannon has further pleaded not guilty to damaging one Claude Monet painting entitled Argenteuil Basin with a Single Sail Boat (1874) at the National Gallery of Ireland on Clare Street on June 29th, 2012.

The court heard previously there has been an “exhaustive process of repair” to the Monet, which is now back on display at the National Gallery.

The jury have viewed CCTV showing Mr Shannon entering the Shelbourne hotel with a second man and walking around various locations.

The court heard there were 80 CCTV cameras in the hotel at the time and there are now 135 cameras.

Eamon Kelly, loss prevention manager at the hotel, told Kerida Naidoo, prosecuting, that his first involvement in the case was when he returned from holidays on January 14th, 2014 and began to review CCTV.

He said the CCTV was burned to a disk and given to gardaí the following day. Mr Kelly said the paintings appeared to have been slashed or torn with some object.

Mr Naidoo asked what the status of the paintings was now and if they would be repaired. Mr Kelly replied that they were going to be destroyed.

Mr Kelly agreed with Michael Bowman, defending, that before he came back from his holidays no one had contacted gardaí or treated the room as the scene of a crime.

He said he reviewed cameras based on statements of staff and the time line of the two gentlemen that were seen in the hotel.

Karl Kane, who worked in the reception of the hotel’s health club, told Mr Naidoo that on the January 8th at about 6.40pm, two men asked to see the swimming pool. He said they did a lap of the pool and were behaving normally before leaving by the main door.

Garda Eugene McCarthy told Mr Naidoo that he formed an opinion from viewing the CCTV and arrested Mr Shannon at his home on January 31st, 2014.

He told Mr Bowman he had spoken with a staff member observed interacting with Mr Shannon on the CCTV footage, but she could not recall meeting the two men or what was said.

He agreed with Mr Bowman that the function room, where the paintings were hanging, had not been preserved as a scene of crime from January 8th to the 15th, when gardaí were made aware.

Mr Bowman asked if there had been a forensic examination at any stage to see if the damage had been caused by a knife. He replied that the painting had been looked at but no one was able to tell how it had been damaged.