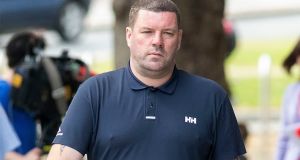 Paul O’Beirne (36), of Colepark Drive, Ballyfermot, pleaded guilty to facilitating the commission of a serious offence by a criminal organisation by the provision and destruction of a motor vehicle. File photograph: Collins Courts

25-year-old Vincent Ryan was shot in the head after dropping his partner and infant daughter at her home.

Paul O’Beirne and Jeffrey Morrow went on trial on June 24th when they pleaded not guilty to Mr Ryan’s murder. Following almost two weeks of legal argument both men pleaded guilty to facilitating a serious offence contrary to Section 72 of the Criminal Justice Act, 2006.

The Director of Public Prosecutions accepted the pleas and Mr Justice Michael White remanded Morrow and O’Beirne in custody until this Friday July 26th for a sentence hearing, but he said he will not pass sentence on that day. Morrow then asked the judge for an early sentence, to which the judge replied: “You will be sentenced by Wednesday, July 31st.”

Mr Justice White also told Mr Ryan’s family that they will be entitled to make a statement to the court about the impact the murder has had on them.

The prosecution alleged that a silver Volkswagen Golf was used by the gunman who shot Vincent Ryan three times.

O’Beirne (36) of Colepark Drive, Ballyfermot, Dublin, has pleaded guilty to facilitating the commission of a serious offence by a criminal organisation by the provision and destruction of a motor vehicle. The charge against him states that he did this knowingly facilitating that criminal organisation or one of its members in murdering Vincent Ryan.

Morrow (37) of Burnell Court, Coolock, Dublin, pleaded guilty to the same offence but his indictment did not mention the provision and destruction of a motor vehicle. Mr Justice White told him on Tuesday that the charge will be amended on Friday and he will be asked to plead again.

Vincent Ryan was shot dead on February 29th, 2018 at McKee Rd in Finglas, Dublin. His partner had just taken their five-week old daughter into the house.

Opening the trial last month Mr Paul Burns SC for the prosecution said Vincent Ryan’s shooting was: “brutal, callous and shocking, carried out in broad daylight in a residential area at a time when you could expect young children to be coming home from school or out playing on the street.”

On day two of the trial Vincent Ryan’s partner Kelly Smyth told Mr Burns that she was with Mr Ryan at his home in Donaghmede, Dublin on February 29th, 2016. They decided to go to her house on McKee Road and travelled in his white Volkswagen Golf GTI with their daughter in the back.

When they arrived at Ms Smyth’s home they pulled up outside and Ms Smyth got out with their daughter and asked Mr Ryan to move the car because it was parked on the grass. Ms Smyth’s brother opened the door of the house and Ms Smyth went inside. When the door closed she said she heard five loud bangs. Her brother opened the door again and they went outside. The windows of the car were “smashed”, she said, and Mr Ryan was seriously injured.

She didn’t see anyone leaving the area, and told Mr Burns that she was focused on her partner. She ran to the driver’s side of the car, opened the door and checked him for a pulse. Several people called for an ambulance and gardaí.

Ms Smyth also told Mr Burns that her partner had worked as a barber but had not worked since October 2015 after he was assaulted outside the Rotunda Hospital. On the day of the shooting, she said, she didn’t notice anyone following them. She said she would normally “have a little look around” because she was “a bit conscious and paranoid” following the assault at the Rotunda.

Acting State Pathologist Dr Linda Mulligan told the trial that Mr Ryan was shot three times and one of the bullets went through his head, causing his death.

The evidence relied on by the prosecution included CCTV footage from O’Beirne’s home showing him disposing of a seat cover that gardaí linked to a car allegedly used in the murder by DNA testing of dog hair samples.

Scientist Rebecca Weld told Mr Burns that she has a PhD in animal identification and in 2016 was a director with Weatherbys DNA laboratories. On July 26th, 2016 she examined DNA samples from a black cocker-spaniel named Lily and an English bulldog named Bailey. She compared them with black and white hairs taken from a cover or sheet of tarpaulin that gardaí said was recovered from a bin in O’Beirne’s garden.

Dr Weld said a partial DNA profile was generated from one of the white hairs found on the cover that matched the DNA profile from the English bulldog. She said the chance of finding the same profile from a dog other than Bailey would be one in one billion.

Previously Joseph Cogan, Bailey’s owner, told Mr Burns that his car, a silver Volkswagen Golf GTI, was stolen from outside his home on October 13th/14th 2015. Mr Cogan told Mr Burns that in the boot of his car was a grey canvas sheet that he used to protect his car from dog hairs.

He said he owns a fawn or blonde bulldog and a black cocker spaniel and the canvas “would have been covered in hairs”.

Mr Cogan was shown the canvas that gardaí said they took from the bin at O’Beirne’s home and from which they retrieved Bailey’s hair. He said it looked “very similar” to the cover that was in his car. He also confirmed that on April 14th, 2016 he gave gardaí permission to take a buccal swab, used in DNA testing, and hair samples from both his dogs.

The legal argument in the trial focused on the garda collection of evidence including CCTV footage and mobile phone evidence.