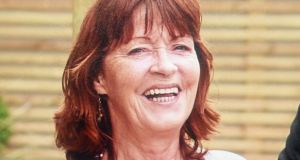 Kieran Greene has pleaded not guilty to murdering Patricia O’Connor (pictured) at her home in Mountainview Park, Rathfarnham, Dublin 14 on May 29th, 2017.

A man accused of murdering his partner’s mother has been portrayed as both “a moron” and “Machiavelli himself” during his trial, the Central Criminal Court has heard.

Conor Devally SC said his client Kieran Greene (35) had a “developmental difficulty” and was portrayed as a “moron” and “a donkey” but had also supposedly buried Patricia O’Connor in a shallow grave in the middle of the night without being noticed.

Counsel suggested that the Mrs O’Connor’s husband, Augustine ‘Gus’ O’Connor, was “intimately involved” in ensuring her body was disposed of.

Mr Greene has pleaded not guilty to murdering Mrs O’Connor at her home in Mountainview Park, Rathfarnham, Dublin 14 on May 29th, 2017. He is the former partner of her daughter Louise O’Connor, with whom he has three children.

Louise O’Connor (41) and her daughter Stephanie O’Connor (22), both of Millmount Court, Dundrum Road, and Louise O’Connor’s ex-partner Keith Johnston (43), of Avonbeg Gardens, Tallaght, are all charged with impeding the apprehension or prosecution of Mr Greene.

The trial has heard that Patricia O’Connor’s body was dismembered and found at nine locations in the Dublin and Wicklow mountains between June 10th and 14th, 2017. Former deputy State pathologist Dr Michael Curtis told the court that Patricia O’Connor’s head sustained a minimum of three blows with a solid implement and the cause of death was blunt force trauma to the head.

The trial heard evidence that Mr Greene walked into Rathfarnham Garda station on June 12th, 2017 and told a detective he had done “something terrible” and dismembered the body of Patricia O’Connor alone.

He told gardaí he was in the bathroom when Patricia O’Connor walked in and hit him with a hurl on the wrist, saying ‘Get out, Get out’. Mr Greene said he grabbed the hurl from her, hit her and did not know want happened next as when he woke up there was blood everywhere and he panicked.

Six months after he was charged with her murder, Mr Greene changed his account and told gardaí he had taken “the rap”. He felt he was being set-up as Louise O’Connor had since got back together with her ex-boyfriend, Mr Johnston.

In the December interview, Mr Greene told detectives that Mr O’Connor had killed his wife using a crowbar and he had taken the blame.

In his closing statement, Mr Devally said Mr Greene had given two accounts of how Patricia O’Connor had died. The initial contention that Mr Greene had done everything alone was “a whole pack of lies” but the prosecution still decided to treat this as a full account of murder.

He said the prosecution wanted the jury to “cherry pick the bit” that goes with his guilt.

“You have been told in every other aspect of the case that what he says is false and are yet being told (the June account) must be true ,” he submitted.

He asked the jurors how Mr Greene could have killed Patricia O’Connor, removed her body from the house and cut her up without anyone knowing or helping him.

Going through the evidence heard, Mr Devally said a decision was made very quickly on May 29th, 2017 that the children could not see anything and they left the house and went to the park with Louise and Stephanie O’Connor at 6.53pm.

Mr Devally said the jury knew that Mr O’Connor did not go to the park immediately with the others and there was reason for this. “Maybe Gus had to take the crowbar with him, someone had to dispose of that,” said Mr Devally.

Evidence has been given that Mr O’Connor was originally part of the trial but shortly before it began, he pleaded guilty to reporting his wife as a missing person on June 1st, 2017, when he knew that she was already dead.

Counsel suggested to the jury that no one else was interested in protecting Mr Greene and if anyone was going to be defended it was not his client.

Mr Greene was “persuaded” to take the blame and said he would take it all on himself, he said, adding that his children would then have a mother and a grandfather with a house.

Mr Devally said his client wanted to tell the truth when he visited gardaí in December. He asked the jury was it reasonably possible that Mr Greene did not kill Mrs O’Connor as much of what was said in his December interview had “an awful lot of truth in it”.

“He is a moron and useless and yet he is Machiavelli himself, a mastermind. It doesn’t add up,” he said and urged the jury to acquit his client of murder.

Defence counsel Garnet Orange SC, for Stephanie O’Connor, will give his closing speech to the jury on Wednesday.