‘It was one of those moments that you never forget in life’, ex-director says 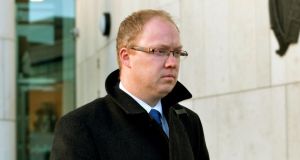 A director at Anglo Irish Bank said that he was left “speechless” after a representative from the financial regulator’s office suggested that the bank consider releasing the Quinn Group from a € 250 million guarantee.

Michael O’Sullivan, who was divisional lending director at the bank from 2005, told the trial of three former Anglo directors that he didn’t think it was “total coincidence” that the suggestion came six days after Sean Quinn had made a similar request to the bank.

In other evidence, he described the moment he learned of the size of the Quinn Group’s shareholding in the bank, through Contracts For Difference (CFDs), saying “It was one of those moments that you never forget in life”.

He said that the CFD holding could potentially destabilise the bank and agreed that this could have “potentially disastrous consequences for the entire Irish financial system”.

The prosecution allege that three former Anglo executives, Pat Whelan, William McAteer and chairman, Sean FitzPatrick, were involved in a plan by Anglo to loan money to the Quinn family and the so called “Maple Ten” group of investors so that they could buy shares in the bank and guarantee the stability of the share price.

The three men have been charged at Dublin Circuit Criminal Court with 16 counts of providing unlawful financial assistance to 16 individuals in July 2008 to buy shares in the bank.

Mr Whelan has also been charged with being privy to the fraudulent alteration of loan facility letters to seven individuals in October 2008.

Mr FitzPatrick (65) of Greystones, Co Wicklow, Mr McAteer (63) of Rathgar, Dublin and Mr Whelan (51) of Malahide, Dublin have pleaded not (NOT) guilty to all charges.

Mr O’Sullivan said that he learned of the CFD situation in November 2007 when David Drumm, then CEO of Anglo, told him the Quinn Group had built up a 28 per cent share position in the bank, through CFD and shares.

He said he was responsible for the Quinn relationship with Anglo, having brought them into the bank when it took over his former employer, Smurfit Paribas, in 1999.

He said his reaction on learning of the Quinn share holding was “one of complete shock”, adding “It was a huge surprise, not something I expected”.

At this point, in November 2007, the Quinn Group were looking to replenish funds which had been depleted from margin calls on the CFDs.

Mr O’Sullivan said: “David Drumm asked me to look at Quinn facilities. What could be unlocked from the system, meaning what undrawn facilities were there and what could be advanced.”

He said they were able to provide the group with €150m, saying that the Quinn business had “substantial security at the time”. Mr O’Sullivan said at this time he understood that the Financial Regulator was aware of the Quinn CFD position.

He said that on May 8th , 2008, he and Mr Whelan met with Con Horan, the Financial Regulator’s prudential director. Mr Horan was described as the “second in command” at the State agency.

He said there was a discussion about reducing the exposure of the bank in relation to the Quinn Group loans and added that it was a “positive meeting.”

He said that before the meeting ended, Mr Horan asked about a €250m guarantee which the bank had from the Quinn Group as loan security.

Mr O’Sullivan said that six days earlier Mr Quinn had asked him to release the group from the same guarantee. The court heard that if the bank had called in this guarantee it would trigger a default in the group’s loans.

The group also needed to be freed from the guarantee in order for their 2007 accounts to be signed off and finalised, which was a condition of lending imposed by other banking syndicates.

Mr O’Sullivan said he refused the request by Mr Quinn.

He said when he heard the same matter being raised by Mr Horan six days later, he and Mr Whelan were speechless.

He said: “We were speechless. We left the regulators office and walked back and we both expressed an element of surprise that such a request could be made.

“It was releasing of security for a highly leveraged borrower.”

He told Brendan Grehan SC, defending Pat Whelan, that the suggestion was in “contradiction” to the rest of the meeting which had been based around the subject of “derisking” the bank’s position.

The regulator’s proposal “would be increasing the risk,” he said. He agreed that it wasn’t a “total coincidence” that the matter came up six days after he had refused Mr Quinn a similar request.

Mr Grehan said: “This was the bank giving Sean Quinn and the Quinn Group a bit of a lifeline at the instigation of the Regulator”.

Mr O’Sullivan said he had no evidence of any discussions between the Regulator and the Quinn Group.

Mr O’Sullivan also gave evidence about his role in the unwinding of the CFD position through the setting up of ten €60m loan facilities for ten high net worth investors.

The court heard that the plan was called “The Maple Transaction” by Morgan Stanley.

He said that he signed off on the ten loan facilities in July 2008 and the loans were drawn down.

On October 11th, 2008 he said Mr Whelan approached him with a mocked up letter and asked him if the original facility could be amended to give the borrowers “more time.”

He said there was a view that “Anglo may not have an independent future and may be taken over” and that Mr Whelan wanted to give the borrowers more time.

Earlier in the day Lorcan McCluskey, a former associate director of lending at Anglo, gave evidence that he had refused to sign these amended letters because he felt it would weaken the bank’s recourse position on the Maple Ten loans.

He said he received a draft of the letter with handwritten notes on it in October. He said one of these notes, which read “Ten Heroes” was in Mr Whelan’s handwriting.

Under cross examination Mr Grehan put it to him that he was overstating his role, saying: “You’re portraying yourself as the mouse that roared.”

Mr McCluskey replied: “I refused to sign it (the facility letters) and I gave that message to Michael (O’Sullivan)”.

Mr O’Sullivan testified that after signing off the letters he formed the opinion, as a result of a meeting with two non executive directors later that month, that the board were not aware of the amendments to the Maple Ten loans.

He said he went to Mr Whelan’s office, testifying: “I was annoyed that the board weren’t aware of the facts as presented to me”.

Mr Whelan told him they would discuss the matter with Mr Drumm, he said.

In late December, while the bank was seeking recapitalisation from the State, Mr O’Sullivan said he raised the issue again with Mr Whelan.

“I spoke to Pat Whelan on December 19th, I got no satisfaction in terms of my concerns,” he said.

He said the next day he telephoned Matt Moran, who was Chief Financial Officer with Anglo and was leading the recapitalisation negotiations. He said the calls were not returned until after he had emailed Mr Moran.

On December 21st he said Mr Whelan telephoned him and there was a “very heated exchange” in relation to the recourse matter.

“He said he was disappointed I hadn’t gone to him. I said I had tried on five or six occasions.

He continued: “I said I been compromised by what had taken place. In my 26 years working in financial services that hadn’t happened before.”

He said the next day Mr Whelan agreed to prepare amended letters to reinstate the original 25 per cent personal recourse on the Maple Ten loans and ten letters were duly sent out.

The trial continues before Judge Martin Nolan and a jury of seven men and eight women.