Open verdict on holidaying couple who drowned in Shannon 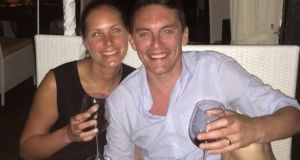 An inquest has taken place in Carrick-on-Shannon into the deaths of Alexandra Dunne and Frank Dunne. Photograph: Facebook

An open verdict was recorded at the inquest into the deaths of a couple who drowned in the river Shannon, in Co Leitrim, during a holiday earlier this year.

Frank Dunne (39) and his wife Alexandra (34), who lived in Germany, had hired a river cruiser for three days and were visiting relatives in Carrick-on-Shannon.

The inquest heard from Elaine McCarthy, Mr Dunne’s cousin, who had dinner with the couple on Wednesday, March 29th, during their visit. They parted ways at about 10pm and Ms McCarthy sent Mr Dunne a text message at 10.22pm which did not deliver.

The following day she called him a few times but got no reply and a day later Mr Dunne’s mother, Jessie, called to say boat hire company Emerald Star, had contacted her to say the couple had not yet checked out.

Ms McCarthy went to the Emerald Star marina and saw the couple’s car in the car park. Their belongings were still on the boat so she contacted gardaí. She remained at the scene while a search was carried out on the river Shannon.

Unable to see anything

Douglas Boyd, a local resident, told the inquest he had been out walking with a friend on the night of March 29th and heard what he thought was someone shouting “Frank” along the river. They went over to the Emerald Star jetties but were unable to see anything, he said.

James Hoban, who lives on the opposite side of the river, said he was on his balcony and heard a male voice shouting. It was hard to see and he could not tell where the noise was coming from. He believed it was someone messing.

Postmortems were carried out on the bodies at Sligo University Hospital by Dr Clive Kilgallon, who found both deaths were due to freshwater drowning. Toxicology reports showed Mr Dunne had 238mg of ethanol in his blood while Ms Dunne had 341mg.

Fergal Kelly, deputy coroner for Sligo-Leitrim, described it as a very tragic incident involving a couple starting out on their married life together. The jury recommended that the local authority improve the lighting in the area where the boat was docked.

L’Arche sex abuse: ‘We didn’t know he had a darker side’ 00:32
Preparations under way for St Patrick’s Day programme in Washington 00:10
Spread of coronavirus triggers European travel curbs 00:02
Why Sinn Féin will not call the State by its name 00:02
Court to deliver judgment on Graham Dwyer’s phone data 00:01