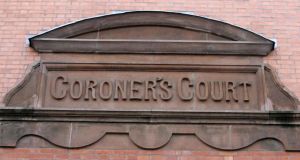 Dublin Coroner’s Court heard the goods lift at Blu Bar in Tallaght had been deliberately modified to bypass safety measures preventing it operating when its doors were open. Photographer: Dara Mac Dónaill

Lift engineers doing “nixers” carried out “ad hoc” repairs on a lift in a Dublin bar that claimed the life of a father of two, an inquest has heard.

Stephen Hampson (31) from Castlegrange Close in Clondalkin, Dublin 22, was fatally injured when he was trapped between the lift and shaft of a goods lift at Blu Bar in Tallaght on August 23rd, 2009.

He died as a result of severe head injuries.

Dublin Coroner’s Court heard the goods lift, which was being used inappropriately by staff to move between floors, had been deliberately modified to bypass safety measures preventing it operating when its doors were open.

Health and Safety Authority (HSA) inspector Kay Baxter told the inquest she identified a number of lift engineers doing “nixers” having lost their jobs in the downturn who carried out “running repairs” to the lift on an “ad hoc basis”.

Mr Hampson had been working as assistant manager at the bar, operated by TBC Bar Ltd, for four weeks when he died.

He was found trapped between the first and second floor by colleagues. Former bar manager Andrew Lacy said he went to help when the alarm was raised and saw Mr Hampson’s hand hanging loose underneath the lift shaft.

There was blood “gushing” from his head, he said. He reached down to take his pulse and Mr Hampson squeezed his hand. When he checked for a pulse a short time later, there was none.

The inquest heard staff frequently used the lift to travel between floors.

Engineers who inspected the lift gave evidence that the electrics had been deliberately modified so it could operate when the doors on the basement and first floors were open.

Consulting engineer Michael Cullen said the modifications were done by “someone who knew exactly what they were at”.

Ms Baxter said there were signs warning it was a goods-only lift but “almost all” members of staff and management travelled in it and it was in “constant use”.

From May 2009 employees started travelling in it single-handedly. They would “get in the lift in a crouched position, put their arm or head and arm back out to push the button” and then “quickly” pull back into the lift, she said.

There was no maintenance contract for it, she said, with unemployed lift engineers carrying out “running repairs”.

An annual certificate of inspection by a competent person should have been supplied to the HSA, said Ms Baxter, and they should have been notified if it was faulty. “It was never tested, never inspected and certainly we were never notified,” she said.

Coroner Dr Brian Farrell said there were “serious risk factors” involved, including the use of the lift when it was not fit for purpose; the modifications; the evidence it was not maintained properly; and that, despite warning signs, it was being used by employees when it was not designed for that purpose.

The jury returned a verdict of misadventure and recommended that operating buttons for goods lifts be placed where they are inaccessible from within the machine and the creation of a database of new and existing lifts so that legal service and maintenance requirements can be inspected and enforced.

Both men pleaded guilty and were ordered to do community service.