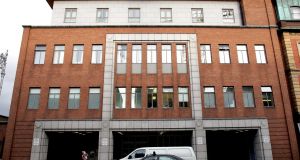 The Rotunda Hospital in Dublin. A baby pronounced dead minutes after her birth is likely to have died due to a clot in the umbilical cord, an inquest has heard. File photograph: David Sleator/The Irish Times

A baby pronounced dead minutes after her birth is likely to have died due to a clot in the umbilical cord, an inquest has heard.

Parents Jane Farren and Feidhlimidh Wrafter, of Spire View Lane, Rathgar, Dublin 6, said they were devastated following the loss of the baby.

They said hospital staff could not explain the cause of their baby’s death.

“I was told it was a baby girl, but she had not survived,” Jane Farren told Dublin Coroner’s Court.

“I burst into tears. I’d never heard her cry. I never contemplated that this could happen.”

Ms Farren said she was told by professor of obstetrics and gynaecology Fergal Malone that staff could find nothing to explain the baby’s death.

“I was told this is something that happens one in one thousand babies. I carried this statistic with me for a long time,” Ms Farren said.

Midwife Chanelle Porter had assisted in the labour ward.

She told the court an epidural was administered to Ms Farren at 10.12pm and CTG monitoring was commenced.

Syntocinon was administered to induce labour, but when progress was slow, a Cesarean section was suggested.

The court heard Ms Farren was reluctant as she wanted to deliver naturally.

She was brought to theatre at 3.44am and the baby was born by emergency Cesarean at 4.17am.

Consultant pathologist Dr Deirdre Devaney said the most likely cause of death was a clot within the umbilical cord, possibly caused by compression.

She said the baby suffered reduced blood supply to the brain and it was most likely to have been caused in the hours prior to her death.

She said this conclusion was arrived at through a process of elimination and a flattened area of umbilical cord was noted at autopsy.

“It’s a terrible tragedy for everyone involved. We do our best but I cannot say definitively,” Dr Devaney said.

Ms Farren, who represented herself in court, said in her deposition that her mother had lost her first child due to an issue with the umbilical cord.

In 2013, the parents received a €150,000 settlement payment following a negligence claim against the hospital.

The inquest was adjourned until November 24th.