Woman who had gun ‘for own protection’ jailed for three years 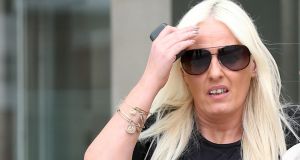 A Dublin mother who told gardaí ­ she had a gun for self protection because of a threat on her life has been sentenced to five years, with two years suspended.

Garda Michelle Fitzpatrick told a sentence hearing last month that colleagues had served Niamh Fitzpatrick (39) GIM forms, which are Garda forms to notify a person of a threat on their life.

The garda then agreed with Keith Spencer BL, defending, that there had been a threat against Fitzpatrick but that had expired.

Mr Spencer submitted to Judge Melanie Greally that his client had been abducted from her flat and suffered a violent attack from a person who is since deceased. Counsel said Fitzpatrick suffered from “profound Post-Traumatic Stress Disorder” as a result of this violence.

Fitzpatrick, a mother-of-one from O’Rahilly House, Ringsend, Dublin pleaded guilty at Dublin Circuit Criminal Court to possessing a Smith & Wesson revolver in an air vent at her home on February 23rd, 2017.

She has 21 previous convictions, mostly for minor road traffic offences.

Judge Greally said she did not think Fitzpatrick’s explanation for how she came into possession of the gun was credible and said it “did not stand up to scrutiny”.

She said a number of reports set out in “considerable detail” the many aspects of Fitzpatrick’s history, “the traumatic incidents which have shaped her life and the damaging alliances which she had formed over her adult life”.

The judge said she was taking into account the fact that Fitzpatrick had “taken steps” over the years to address her heroin addiction and the fact that she had a number of mental health issues.

Judge Greally sentenced Fitzpatrick to five years in prison and suspended the final two years on condition that she remain under 18 months of probation supervision on her ultimate release from prison.