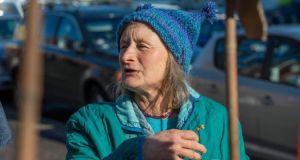 Sionad Jones (61) was found her guilty of dishonestly appropriating felled spruce wood between November 1st, 2018 and December 4th, 2018 to the value of €500. File photograph: Michael MacSweeney/Provision.

A grandmother has received a 12 month suspended sentence after being found guilty of stealing €500 of Sitka spruce belonging to forestry agency Coillte having cut down more than 200 trees in a Co Cork forest with a chainsaw.

Following a trial at Cork Circuit Criminal Court in February Judge Seán Ó Donnabhain directed the jury to find Sionad Jones (61) not guilty of causing criminal damage to the Coillte Forest near her home at Maughnaclea, Kealkill.

She was found her guilty of a second charge of dishonestly appropriating felled spruce wood between November 1st, 2018 and December 4th, 2018 to the value of €500.

The trial had heard that 250 trees were felled in the wood and 250 more were ringbarked. The court heard Jones aimed to promote native broad-leaf Irish trees through her actions and planted trees in the clearings herself.

Jones had told the court she had a right to forage under ancient law and that she was one of earth’s protectors managing part of the forest because of her love for Ireland’s native trees. However, she said she was prepated to desist from cutting and taking woods from the plantation next to her house.

The case was adjourned until Friday to see if Jones would keep her undertaking to the court and defence barrister Peter Flynn said that there had been “no problem at all” since the case.

He said an official from Coillte had visited the site where Jones had planted broad leaf trees and had agreed to protect these by fencing them off from deer. He said Coillte had also vowed to plant other trees adjacent to the site.

The judge made an order that Jones forefit the chainsaw and other equipment she had used to cut down the trees. He imposed a 12 month sentence which he suspended for 12 months. This followed an undertaking from Jones that she would be of good behaviour and keep the peace during that period.

Jones said she had no regrets about coming before the courts.

“Hopefully as more of the spurce in the vicinity becomes of a size that they are ready to harvest, Coillte will take them away and replace them with with broadleaf trees.”

Joe Biden does not want to see guarded border in Ireland after Brexit 22:55
Minister to meet Dublin City Council on future of Oscar Traynor site 22:27
Lack of ‘consistency’ in how Tusla operates, says chief executive 22:05
Prison service accepts ‘urgent need’ to better care for mentally ill inmates 22:05
Cannabis grower’s first crop so bad she could not give away, court hears 22:01