Teens videoed assault which left friend blind in one eye 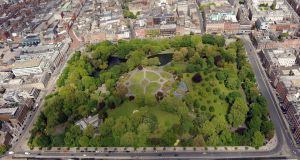 The court heard that between 30 to 40 of the boys’ friends were present in the park when the incident took place. Photograph: ststephensgreenpark.ie

A teenager who viciously assaulted a young man with autism leaving him blind in one eye has been given a three year suspended sentence following a period of probation supervision.

The attack, which occurred in front of scores of mutual friends at Dublin’s St Stephen’s Green three years ago was videoed by several witnesses on their phones.

Dublin Circuit Criminal Court heard footage from this was used by gardaí in their investigation.

The perpetrator, who is now 17 but was aged 15 at the time, pleaded guilty to assault causing serious harm to the victim on August 13th, 2016. He cannot be named as he is a minor.

The Children Act 2001 allows a court to impose a deferred child detention order, in which the case is adjourned for a maximum of one year under probation supervision. On the adjourned date the judge can impose the period of detention, suspend part or all of it or impose a community sanction.

Judge Martin Nolan said at a hearing last year that it was difficult to know why the accused had acted the way he did and said the case had been a tragedy for the victim and his family.

He noted the teenager’s age and lack of convictions. He said the boy has good family support and was unlikely to come before the court in relation to an offence as serious as this again.

He said he felt reform of the child in this case could be accommodated without a custodial sentence.

Judge Nolan imposed a period of detention of three and a half years which he deferred for one year on condition the boy is supervised by the Probation Service and obeys all their instructions and directions.

He told the boy that it was a serious case and he should be “terribly ashamed” of what he had done.

“[The victim] will carry with him for the rest of his life the scars of what you did and he will never be able to escape from what you did to him,” said Judge Nolan.

He told the accused he was being given a “considerable chance” which he should take and if he did not comply with the directions of the Probation Service he would end up in detention.

On Tuesday, Judge Nolan noted that the teenager had engaged well with the Probation Service and confirmed the 3½ year detention which he suspended in full.

Garda Sonya Skelly told Dara Hayes BL, prosecuting, at the previous hearing, that both youths knew each other as they were part of a large group of friends who used to congregate in the city centre.

The injured party told gardaí that in June or July of 2016, the defendant started harassing him on Facebook and making comments about his autism.

The victim said that when his friend refused to stop bullying him, he blocked him on Facebook, but that the defendant then began texting him and making derogatory comments.

The victim said he wanted to talk to the boy to sort it out and they met on the day in question in the rock garden of St Stephen’s Green.

The court heard that between 30 to 40 of their friends were also present when the then 15-year-old pushed the victim hard on the shoulders and then took off his jacket as if preparing for a fight.

The teenager got the victim in a headlock and punched him about four times into the right eye.

The victim went unconscious and collapsed “like a sack of potatoes”, according to one witness, whereupon the perpetrator kicked him again in the head.

He was brought by ambulance to the Eye and Ear Hospital on Adelaide Road where a scan showed his optic nerve was damaged.

The victim spent five days in hospital and two medical reports confirmed a complete loss of vision in his right eye, with no chance of recovering that vision.

A victim impact statement was not read out but was handed to the judge. The perpetrator was identified by witnesses and met gardaí­by appointment with his mother in September 2016.

He told gardaí­ he hadn’t realised the “slagging” was being taken seriously and said he wanted to apologise not only for the damage that he did for also for the slagging. He has no previous convictions.

Pieter Le Vert BL, defending, said the perpetrator had been working full-time in a Youthreach programme where he had a mentoring role, and hoped to do a post-Leaving Cert course in coding.

A letter from Youthreach said the perpetrator was very intelligent and ambitious and had expressed an interest in working as a teacher. A probation report placed him at low risk of re-offending and said he had great insight and remorse into his wrongdoing.

“If he could take it all back, including the slagging, he would. He never meant for one second for the injured party to suffer the devastation that he has,” said Mr Le Vert.