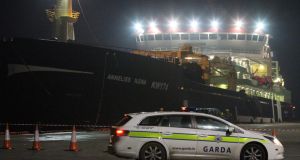 The Dutch super-trawler “Annelies Ilena”, tied up in Killybegs after it was detained by the Irish Naval Service. Photograph: Niall Duffy

Seagulls alerted the Irish Naval Service to likely breaches of EU fishing regulations on one of the world’s largest trawlers, it was claimed in court yesterday.

Lieut Michael Devaney told Donegal Circuit Court that he and other officers from the Lé Róisín boarded the Dutch vessel Annelies Ilena on November 22nd, 2013.

The 144-metre, 14,000-tonne trawler was formerly the Atlantic Dawn when it operated out of Killybegs.

Lieut Devaney told Judge John O’Hagan and a jury that he saw seagulls following the vessel and retrieving fish from the rear of the trawler.

When the vessel was boarded there was evidence that a grading machine was in the production room and fish was being discarded. The trawler was detained off Tory Island and taken to Killybegs.

Lieut Devaney said that on inspection he found there were no records of any fish discards between October 8th and the date of the boarding.

Gerrit Plug (58), a Dutch national who is skipper of the Annelies Ilena, has pleaded not guilty to five charges.The offences include discarding species of fish which are subject to quota, failing to record discards and having illegal equipment on board.

The court was told the trawler had illegal equipment for grading fish and discarding some straight back into to sea which should have been kept. The State’s case is that this was an ongoing, systematic practice on the trawler.

The prosecution maintains Mr Plug discarded fish known as horse-mackerel and retaining larger fish to increase the value of the catch.

Patricia McLaughlin, for the prosecution, opening the case, told the court all of the offences relate to a practice known as high-grading. That involves discarding fish of legal size to maximise the value of the catch.

Ms McLaughlin compared it to separating the wheat from the chaff. She said the problem with that related to the conservation of fish species which are subject to quota. “The stocks are depleted, not only by the fish which are kept but also by those which are of legal size but discarded back into the sea dead,” she added.

The EU had imposed various regulations to stop the practice of high-grading. If a vessel discarded any fish over 50kg it must be logged but no discards were logged in this case.