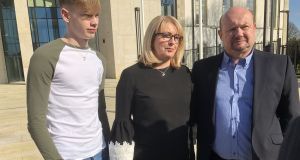 Family members of the late Katie Murphy outside Waterford courthouse after Edward O’Shea was sentenced to 14 months in prison include her brother Scott, mother Vivienne and father Hilary.

A judge has criticised some young male drivers for treating public roads “as some form of private racetrack” to show off their driving skills and the performances of their vehicles, without regard to the dangers for their passengers or others.

Judge Eugene O’Kelly made his comments as he sentenced Edward O’Shea (19) from Magnh, Fenor, Co Waterford, to 14 months in prison for careless driving causing the death of Katie Murphy (16) in a crash in October 2016.

He was sentenced to 14 months in prison, concurrent, on each of the careless driving charges, by Judge O’Kelly on Tuesday and also banned from driving for six years. The judge also fined him €800 for driving on a learner permit without being accompanied by a qualified driver.

The judge referred to evidence of Snapchat messages sent from the car, not heard by the jury in the trial, one of which was from Katie Murphy to a friend shortly before the crash in which a female was heard saying they were “probably going to die” and another which contained a male voice saying they were travelling “twice over the speed limit”.

The court heard that the four friends were in a high-powered, modified Toyota coupé, registered in the name of Edward O’Shea’s family’s garage business and being driven by O’Shea on the evening of October 5, 2016. O’Shea had a provisional licence since the previous May and there was no qualified driver in the car with him.

With other friends behind them in cars in convoy, they decided to head for a scenic area outside Tramore, and as they hit about 65kph, the other cars lost sight of O’Shea’s car. On the Cliff Road on the edge of the town, the car went sideways at the entrance to a housing estate, hit a kerb and then collided with a wall.

The defendant told gardaí­ at the scene that he didn’t know what happened and was “only doing about 30” at the time. He also said, “I can’t remember, I had a blackout,” at the scene.

A garda forensic crash investigator found that the driver lost control of the car near the housing estate entrance and the car went sideways into a wall.

O’Shea was interviewed four times in a garda station following the crash but had no comment to make on each occasion.

It was evident from a probation report prepared on O’Shea that he was “very affected by the consequences” of his actions and “extremely aware of the terrible loss that the Murphy family” suffered. He was “not, in any way, unaffected by what happened,” Mr O’Kelly said.

By pleading guilty to the careless driving charges, he said, “he was prepared to accept responsibility for the consequences of his bad judgement and, obviously, bad driving on this day where he failed to negotiate this turn”.

There were no previous convictions and a psychotherapist he has since been attending found he has been suffering from depression, survivor’s guilt, post-traumatic stress disorder, flashbacks, shame, grief, and insomnia.

A letter written by O’Shea to the Murphy family was read out by his barrister, in which he said that, “with a broken heart, I want to personally apologise to the families” affected by the tragedy. “I am truly sorry,” he said. “I loved Katie and I miss her so much. I am so sorry that this happened and that you have to feel the pain and devastation you are going through.”

He said he was “devastated” by the effect on so many people of his “bad judgement” on the day of the crash. “I am truly sorry and hope that one day you will be able to forgive me.”

Judge O’Kelly said he put the offences at the very upper end of the range of careless driving offences but took account of the accused’s age, 17 at the time, and immaturity. He criticised the O’Shea family garage’s “extreme and blatantly” irresponsibility in “facilitating” the accused’s driving unaccompanied, by putting him on the garage’s insurance policy.

“Some drivers,” the judge said, “particularly young men, treat the public roads as some form of private racetrack, for the exhibition of what they believe to be their driving skills and the performances of their vehicles, and do so without any regard for the potentially catastrophic consequences for their passengers and other road-users.”

“Our beautiful daughter Katie was only 16 years of age when a careless act by Edward O’Shea ended her life,” Hilary Murphy said.

“In the time elapsed since her death we have never heard from Mr O’Shea. He has never shown any remorse, never sent a card or flower on her anniversary or at Christmas. In our opinion he has shown himself to be a very cold-hearted person. I wonder has he ever wondered what it’s like to walk in our shoes.”

He also said it was the family’s view that “we lost our daughter because Mr O’Shea was showing off, whilst driving a high-powered car (which his engineering expert said was capable of speeds of 150mph). It was the most senseless, careless act imaginable and we are the ones left to grieve for ever more.”

Mr Murphy added that O’Shea had “destroyed our lives” and that there is no joy any more in family occasions, and the tragedy had placed strain on his and his wife’s marriage.

The family have since set up a road safety campaign, Odd Socks for Katie, asking drivers to remember the duty of care they have to their passengers, and also asking any child or young adult in a car being driven carelessly to have “the courage” to ask the driver to slow down.

Vivienne Murphy, battling tears, described her daughter as “the most beautiful person, inside and out” who was funny, compassionate and full of life and charm.

“On 5th October, 2016, Edward O’Shea, with careless, selfish actions, took away the life of my only daughter Kate. The life I once had and loved has been crushed with one person’s reckless actions.”

She concluded her statement: “I miss you Kate, I will always love you.”