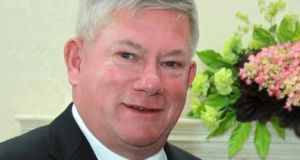 The only feature of support missing in Court 28 of the Circuit Civil Court on Friday when Mr Justice Ray Groarke handed over the presidency of the court to Ms Justice Patricia Ryan was a Mexican Wave.

When barrister Paul O’Neill completed tributes to Mr Groarke on behalf of the Bar Council he said it was traditional that such speeches ended with a prayer and a hymn.

It was the first time in decades that veteran court reporters had witnessed so many usually dignified members of the legal profession in their black gowns and sombre dress lose absolute control of themselves.

Earlier the new President of the Circuit Court, Ms Justice Ryan, said Judge Groarke had brought to the position of president a wealth of experience and a wide knowledge of the law together with a strong work ethic and positive attitude.

Mr Micheal O’Higgins SC, Chairman of the Bar Council, said Judge Groarke had entered the Law Library in 1973, became a judge in 1996 and had been appointed President of the Circuit Court in 2012 modernising and improving the court over his seven year presidency.

He was now returning as Sheriff of Galway to his beloved West of Ireland.

He was eminently fair and scrupulously honest with a phenomenal capacity to absorb facts.

Ms Geraldine Clarke on behalf of the hundreds of solicitors with whom he had dealt both as a judge and president of the court, thanked him for his courtesy and fair attitude towards all of them.

Judge Groarke said being appointed a judge carried with it an enormous sense of obligation to do the work, treat litigants with courtesy whatever the circumstances and to do the best they could by their Oath to do justice between the parties.

Having been appointed president of the court had brought an even greater privilege with additional obligations and he had had the very good fortune that during the course of his Presidency he had received the unqualified support and encouragement of every judge in his court.

He thanked Tony Burke, his tipstaff of almost quarter of a century, and referring to the great support of his family said his wife, Joan, was known at home as the Court of Appeal who, on numerous occasions had overturned his judgments relating to domestic decisions.

Ray Groarke was a staunch supporter of the freedom of the press and during his presidency not once granted an application for orders restraining publication of details of cases unless in accordance with law, instead drawing attention to the “usual responsible” reporting of the media.