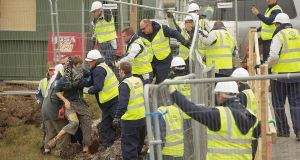 Shell to Sea protestors and security clash at the site of the Corrib pipeline in Aughoose, Co Mayo, in 2011. Photograph: Keith Heneghan/Phocus

Two protesters have been cleared of criminal damage resulting from a protest at a Shell compound in north Mayo but still face charges of violent disorder. Gerry Bourke, Aughoose, Pollathomas, Co Mayo, and Liam Heffernan, Kilnagear, Belcarra, Castlebar, Co Mayo, were both charged with violent disorder and criminal damage following a protest at a Shell compound at Aughoose, Pollathomas, on June 23rd, 2013. They pleaded not guilty to the offences before Judge Petria McDonnell in Castlebar Circuit Criminal Court.

The trial, which is now in its sixth day, heard evidence that up to 70 protesters entered the compound and damage was caused to equipment on the site. They refused to leave the compound when asked by security officers and the court heard a “running battle” ensued, which meant the security had to retreat to an inner compound on the site.

Mr Bourke had been accused of causing damage to heras fencing while Mr Heffernan was accused of damaging timber hand rails while on the site. Following the conclusion of the prosecution evidence, applications were heard in the absence of the jury and as a result of the legal argument, Patrick Reynolds informed Judge McDonnell that the DPP wished to enter a nolle prosequi, meaning “do not prosecute”.

Judge McDonnell told the jury of eight women and four men that each of the charges of criminal damage was being withdrawn, but the charges of violent disorder remained. Due to further legal argument between the prosecution and the defence, there was no evidence heard before the jurors, who were sent home early by Judge McDonnell. The defence is expected to go into evidence tomorrow.