Man who felt pensioner’s bottom found not guilty of assault 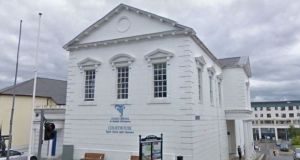 A young man who knocked a pensioner unconscious after feeling his bottom in a chip-shop has been found not guilty of the attack.

Kevin Crawford (22) walked free from Letterkenny Circuit Court on Friday, after a jury needed just 17 minutes to find him innocent.

The jury of seven women and five men had watched CCTV footage from the Chicken Corner Takeaway in Buncrana which showed the row which took place on April 26th, 2014.

The film showed Mr Crawford feeling the backside of Patrick ‘Pa’ Deeney (67) before the pensioner reacted by swinging out an elbow at the defendant.

Mr Crawford reacted by throwing one punch at Mr Deeney which knocked him unconscious even before he hit the floor of the takeaway.

Mr Deeney’s son-in-law Shay Kinsella rushed to the pensioner’s aid as blood streamed from his nose and mouth.

As he stood over the unconscious man, Mr Kinsella told the attacker “You f***ing killed him.” He then alleged that Mr Crawford said “”He had it coming, he deserved it.”

In his evidence, Mr Crawford said he had been in a car crash several months before the incident in the chip-shop and had broken two bones in his jaw. He said he was left in huge pain when Patrick Deeney struck him with his elbow.

He denied that he was homosexual saying he liked girls and was only feeling Mr Deeney’s bum for a bit of fun as he had consumed four pints and was in great spirits.

Mr Crawford grandfather Eddie gave evidence that he contacted Pa Deeney about five weeks after the incident to see how he was. He alleged that Mr Deeney called his grandson a “queer bastard” and told him to send him away before he is found dead.

The jury retired to consider if Mr Crawford, of Burwood, Buncrana, was guilty of assault causing harm but returned with a not guilty verdict just 17 minutes later.