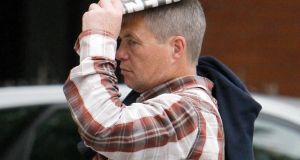 A Dublin man who claimed he couldn’t afford vet bills for his sick dog will avoid a jail term for violently killing the animal in a park full of children.

One witness saw Liam Dowling (44) swing the Jack Russell dog overhead by its lead and smash it to the ground up to 30 times as he crossed a park area by Clonliffe College.

Garda Shane Mengessidis said that Dowling was also seen putting his foot on the dog’s head while it was on the ground and pulling the lead tight.

He has 12 previous convictions, including a four and a half year sentence for a drugs offence.

Judge Martin Nolan commented that “by any standard what happened to this poor dog was incredibly cruel”, but noted that Dowling had been on prescription drugs at the time.

He further noted that Dowling cares for a child and is a “contributing member of society.”

The judge said he intends to impose 200 hours of community service in lieu of a two-year sentence if Dowling is suitable.

He said he would not impose a ban on Dowling keeping animals, as he didn’t want to deprive the man’s child of having a dog.

Garda Mengessidis told Cormac Quinn BL, prosecuting, that Dowling walked across the park and every so often swung the dead animal over his head, until he entered some bushes.

Witnesses, including children, subsequently saw Dowling re-emerge with only the dog’s lead.

Dowling told gardaí­ at the scene that the dog had run off when he had taken it off its lead, but later admitted killing the pet.

Garda Mengessidis said a vet with the Dublin Society for Protection of Cruelty to Animals (DSPCA) found the dog had died from repeated blunt force trauma to its body.

Dowling claimed the dog, a family pet of nine years, had been sick for up to five months and he didn’t have the money to pay for vet bills.

He said he had tried to suffocate the pet in fields and denied knowing about an euthanasia procedure provided by the Irish Blue Cross.

“Sorry, I thought I was doing the right thing,” Dowling said in interview.

Garda Mengessidis agreed with Luigi Rea BL, defending, that Dowling said his child had been fond of the dog.

He further agreed Dowling had a drug problem and was on antidepressants at the time.

Mr Rea submitted to Judge Nolan that it was Dowling’s initial intention to smother the dog, but the antidepressants led to his “distorted behaviour.”

He asked the judge to take into consideration his client’s early guilty plea, his co-operation and that he has no history of cruelty to animals.