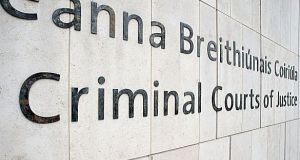 The judge adjourned sentencing to allow a probation report be prepared and remanded Raymond McElwaine (68) in custody until October 8th, 2020, for finalisation of sentence. File photograph: The Irish Times

A judge has commended a survivor of child sexual abuse for her “strength and courage” in coming forward to make a complaint against her father due to her concerns for other children.

Raymond McElwaine (68) of Silverwood Road, Rathfarnham, Dublin, pleaded guilty to eight sample counts of indecent assault and sexual assault of his daughter at the former family home in Balrothery Estate on dates between June 1988 and December 1994.

Ms Jennifer Lydon McElwaine, who was aged between six and 11 years old when she was abused, waived her right to anonymity so her father could be named.

In her victim impact statement she outlined how the sexual abuse perpetrated by her father continued to affect every aspect of her life: “ It is a cancer I am fighting every day.”

She outlined how after she had first spoken up as a six-year-old about what was happening her mother had been very upset and her father had cried and pleaded that it was a mistake and a misunderstanding. She described the fear and shame and how lonely and scared she had felt.

She said the detrimental effect of not being heard and validated as a small child was enormous. She described how her father controlled everything in the house and she now understood how her late mother had been controlled and manipulated by her father as she had been.

What did Ms McElwaine say?

Ms Lydon McElwaine told the court when she later came forward as an adult to disclose the abuse to her family due to her concerns about children, her father had implied she was making it up.

“My father cried and manipulated his way out of it,” she said and outlined her devastation at how relationships within the family had suffered as a result.

She said her father had shown no remorse.

“I never wanted this. All I wanted was my father to acknowledge what he had done,” she said.

Ms Lydon McElwaine said her father had been meant to protect her but instead used her for his own sexual gratification.

“The only person my father ever protected was himself . . . I have been left with a cross to bear for the rest of my life,” she told Judge Karen O’Connor. “Child sexual abuse is a life sentence.”

Judge O’Connor said that despite going through the bereavement of her mother she still had the strength to speak out in an effort to protect other children which showed great courage and concern for others.

She told Ms Lydon McElwaine she deserved “to feel proud that you have the strength to do what you have done”. She said she hoped the relationships within the family could be repaired.

Judge O’ Connor adjourned sentencing to allow a probation report be prepared and remanded McElwaine in custody until October 8th, 2020, for finalisation of sentence.