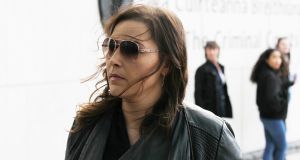 A former Labour Party adviser has rejected a suggestion that video clips taken at the Jobstown protest in 2014 show an atmosphere at odds with her evidence that she was fearful.

Continuing her evidence to the trial of Solidarity TD Paul Murphy and six others, Karen O’Connell said the video clips shown to the court were maybe of four minutes duration while she and then tánaiste Joan Burton had been stuck inside garda cars on the day in question for more than three hours.

“I am telling you that I was very fearful and I was very upset at the time,” she told Pádraig Dwyer SC, for one of the defendants, Frank Donaghy.

Mr Murphy, of Kingswood Heights, Tallaght, is accused of the false imprisonment of Ms Burton by restricting her personal liberty without her consent on November 15th, 2014, at Fortunestown Road, Jobstown, Co Dublin. He is also accused of a second charge in relation to the same offence against Ms O’Connell.

Also facing the same charges are: Kieran Mahon, Bolbrook Grove, Tallaght, and Michael Murphy, Whitechurch Way, Ballyboden, both of whom are Solidarity councillors with South Dublin County Council; Scott Masterson, a self-employed courier, of Carrigmore Drive, Tallaght; Ken Purcell, a precision operative, of Kiltalown Green, Tallaght; Mr Donaghy, a retired construction worker, of Alpine Rise, Belgard Heights, Tallaght, and Michael Banks, of Brookview Green, Tallaght, whom the court was told does not have an occupation that brings him into contact with the public.

All of the defendants have pleaded not guilty to the charges.

Ms O’Connell was giving evidence on her second day in the witness box.

The trial was shown footage taken on her phone and that of Ms Burton first inside a Garda car and later inside a Garda 4x4, as both vehicles were surrounded by gardaí and water protesters. In one clip, Paul Murphy could be seen standing at the back of the stationary car, with other men, looking in.

Ms O’Connell said she regretted using the phrase “f**king dregs” at one stage when in the vehicle, as recorded on one video clip, near the end of the three and a half hour incident. She said she meant the phrase as in “the end of something” and that she had been on many protests and there was frequently a cohort who would not want to finish, but to continue with the protest.

She said she was not proud of the language, but it was only human when in a very stressful situation to use “language like that”.

When Mr Dwyer said the video clips showed her “relaxed and contemptuous” as the 4x4 was being “slow-marched” towards the main road in Jobstown, she said that was his opinion and she did not agree.

Asked about video that recorded laughter within the car, Ms O’Connell said it was a human reaction sometimes to laugh when in a stressful situation. At the time, she was “panicky, upset and crying” and there were people on all sides of the car.

Ms O’Connell, who joined the Labour Party when she went to university as a mature student, said she had taken part in Shell to Sea protests and agreed that those protests had involved sit-down actions and the blockading of trucks and other heavy vehicles.

“Yes, but there is a difference between what happened in Jobstown and at Rossport. We couldn’t leave that day in Jobstown.”

She agreed that peaceful protest often involved causing disruption to people. The objective could sometimes be to interfere with the right to move, Mr Dwyer suggested. “I disagree,” Ms O’Connell said.

Mr Dwyer said during the protests she had been involved with in the Shell to Sea campaign she believed she had the right to interfere with the movements of truck drivers. “But not their liberty,” Ms O’Connell said. “I believe in peaceful protest.”

After asking Ms O’Connell about her work with the Labour Party, he said it claimed to represent the marginalised in society, the unemployed, and the uneducated. Ms O’Connell agreed.

“So what is your definition of the dregs,” Mr Dwyer then asked.

Ms O’Connell said she was not proud of the language used, that she had been inside the cars for more than three hours by that point, and that she’d been at many protests where there were a cohort who didn’t want the protest to finish.

The trial, before judge Melanie Greally and a jury, has adjourned until Monday.