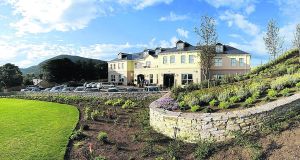 A man who caused €66,000 of damage to Ballyliffin Lodge Hotel in Co Donegal during a naked rampage has been ordered to pay €5,000 compensation or face 20 months in prison.

A man who caused €66,000 of damage to a Co Donegal hotel during a naked rampage has been ordered to pay €5,000 compensation or face 20 months in prison.

Eamon Devlin (41), from Drumintee Road, Killeavy, Newry, blamed a combination of drink and prescription medication for his behaviour at Ballyliffin Lodge in September 2016.

His lawyers had pleaded not guilty on his behalf claiming it was a case of “involuntary intoxication” but Judge John Aylmer found him guilty at Letterkenny Circuit Court.

The trial heard that Devlin booked into the hotel with his three-year-old son as he was going through a divorce and wanted to spend time with his child.

They played pitch and putt, went swimming and ate before Devlin arrived in the reception area totally naked at around 5am carrying his son. He asked staff to come to his room as there were “gypsies” present who needed to be removed.

Seamus Henry, the night porter, found nothing wrong but about an hour later he received a call from a neighbouring room complaining of shouting.

He went upstairs with a colleague and noticed the corridor was flooded. A master key was used to try to gain entry to Devlin’s room but the damaged door had to be forced open.

Mr Henry said sinks were pulled off the bathroom wall, the room was under three inches of water and there was broken glass everywhere. The water spread to three other rooms.

Devlin was arrested and interviewed at Buncrana Garda station. He blamed stress, medication and alcohol for his behaviour and offered to pay compensation for the damage.

He said he recalled going into the bathroom but it went dark, he could not find a way out and believed the gypsies were in the room taking his son. He also said he was taking tablets for an ear infection called Day and Night Nurse.

The court heard that at the time of the incident Devlin’s ex-wife had told him that she was planning to move to the US with her son and he was under severe stress.

“The last five years have been a nightmare for me personally. I want to be a role model for my son. This is a black mark for me. I have to live with this but I want to rebuild my life,” Devlin said.

Judge Aylmer said Devlin was a man of good character who had no previous convictions and was going through a bitter matrimonial despite at the time.

He adjourned the case until next December to allow Devlin to pay compensation of €5,000 to the hotel in lieu of 20 months in prison. If the sum is paid, he would suspend the jail sentence for 12 months.