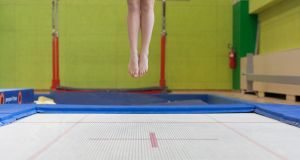 It was not known if the injuries had been caused by glass from a broken mirror or by a protruding metal bolt on the trampoline. File photograph: iStock

A six-year-old schoolgirl, who suffered a “nasty” deep laceration to her knee while practising gymnastics, has been awarded €30,000 damages against Gymnastics Ireland.

Kevin D’Arcy, counsel for Holly Murray, of Drynam Drive, Kinsealy, Co Dublin, told judge Eoin Garavan in the Circuit Civil Court that Holly had been working on a trampoline when the accident happened in May 2017.

Mr D’Arcy, who appeared with Niall Corr Solicitors, said the accident happened at a gym class at Leader Academy, Feltrim, Kinsealy, Co Dublin, where a wall mirror was cracked and broken and supported by tape.

He said Holly’s mum, Glenda Murray, had been advised that her daughter, then aged four, had been involved in an accident in which her left knee had been injured. When her mother arrived at the gym she found the laceration bleeding profusely.

Mr D’Arcy said Ms Murray had been informed Holly had been directed to run a trampoline and had fallen, suffering two lacerations, one a very deep one, to her left knee.

It was not known if the injuries had been caused by mirror glass or by a protruding metal bolt on the trampoline.

He told the court Holly had been brought to the VHI clinic near Swords where five stitches had been inserted in the deep wound.

Counsel said the Irish Gymnastics Company Limited, which trades as Gymnastics Ireland, at Irish Sport HQ, National Sports Campus, Blanchardstown, Dublin 15, had offered Holly a settlement of €25,000 which he considered somewhat light although he was recommending approval of it to the court.

The judge, having viewed the scar on Holly’s knee, said she would have a permanent mark on her leg for the rest of her life and he considered the offer too low.

Following a brief adjournment to facilitate talks with the defendant, Mr D’Arcy returned to court a short time later and said the offer had been increased to €30,000 which the judge approved and directed payment into court of the amount.