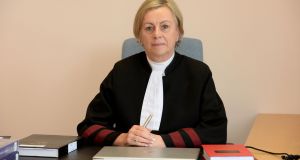 A judge in Longford has ruled four people involved in a minor traffic collision “deliberately and falsely exaggerated” their injuries in a bid to claim compensation totalling €240,000.

Throwing out the personal injury claims at Longford Circuit Court on Friday, Judge Karen Fergus said the four people were passengers in a taxi in January 2017 when it was “tipped” by another vehicle that quickly fled the scene and has never been traced.

Having heard evidence earlier this month, Ms Justice Fergus said she was satisfied an incident occurred at the White Linen Woods Roundabout in Longford town on January 18th, 2017.

However, the impact was so “minimal” that it caused only “minor cosmetic damage” to the taxi in which the four were travelling, the judge said.

She said the four passengers “seized on the opportunity” that arose and “deliberately exaggerated their injuries”.

Four ambulances arrived on the scene and two of the passengers were assisted out of the taxi while the other two were removed on spinal boards. They were all discharged from hospital within hours of their admission.

Ms Justice Fergus said the impact to the vehicle was low, as evidenced by an assessor’s report. Some paint had fallen off the rear bumper but there was no distortion to it or the panel and only “cosmetic repairs” were required.

Each of the claimants, all of whom were represented by Longford-based solicitor Fergus Feeney, sought up to €60,000 damages in the Circuit Court, plus legal costs against the MIBI.

Ms Justice Fergus said the taxi driver had given evidence that as he proceeded onto the roundabout, he was tipped from behind by a small silver Citroen driven by a male with a hoodie, who immediately drove away. There was no CCTV on the roundabout and the car has never been traced.

The taxi driver said that when he came back to the car all four passengers were “complaining loudly” of being injured.

A garda who arrived on the scene immediately after the collision described seeing the passengers “chatting away” in the taxi.

Dismissing their case, Ms Justice Fergus said credibility was “vital” when making a claim for personal injuries. She said she found the evidence of all four claimants to be “formulaic” and that it appeared to be “well-rehearsed”.

She dismissed their claims and awarded legal costs to the MIBI.

Separately, Ms Justice Fergus dismissed another personal injuries claim brought by a man who tripped over a hole on a footpath in Longford on March 12th, 2017. He was also represented by Mr Feeney.

Michael McDonagh, a 23-year-old factory worker from Palace Drive, Ardnacassa, Longford, said he did not see the hole when his heel went into it, causing him to fall over. He sued Longford County Council for personal injuries.

Mr McDonagh said he had to be helped back to his father in-law’s house after the fall. He said he suffered severe pain for weeks and had to give up his job with Longford Tidy Towns. He claimed he could not run his usual 10km per day and suffered from depression as a result.

An architect gave evidence on Mr McDonagh’s behalf that Google Maps showed a pole with a yellow traffic sign in situ on the path in 2011. He then produced a series of photographs which showed the pole had been removed and part of it was projecting from the ground with a jagged edge.

Ms Justice Fergus said there was “not a shred” of evidence to suggest the council removed the pole and left it in this manner. She said it may have been removed by a third party.

She said the council could only be held liable if it negligently removed the pole in question. She dismissed Mr McDonagh’s case and made no order as to costs.

Ms McDonagh, also represented by Mr Feeney, claimed she was defamed by a checkout assistant who allegedly told her she was not supposed to serve her, under orders from her manager. The claims were denied.

Ms McDonagh claimed she was “mortified” when this allegedly occurred. She said she asked to see the manager but was told the manager was not there that day.

Eugene Hill BL, for the defendants, put it to Ms McDonagh that she had been spoken to a number of times previously about using baskets provided by the store while shopping there. Ms McDonagh denied ever having been spoken to.

Store signs affixed to the checkout, regarding the shop’s policy on the use of baskets for items, were shown to Ms McDonagh. She denied ever having seen them before.

Mr Hill put it to Ms McDonagh that while shopping she had items on top of her buggy, and beneath her buggy, and the only thing that was said to her on the day in question was a reminder of the store’s policy regarding the use of baskets and that if she did not use them in future, she would not be served.

Ms McDonagh denied she had ever been warned previously or that she had items underneath her buggy.

It was also put to Ms McDonagh that when she returned to the store two days later, she “escalated” the situation and was shouting at the manager – which she denied.

Ms Justice Fergus said she accepted the defendants’ description of the events as being more probable. She said the shop assistant was an experienced employee who presented as a soft-spoken woman.

The judge said she accepted the defendants’ position that the shop assistant “simply reminded” Ms McDonagh of the store’s policy in relation to the use of shopping baskets provided by the store.

Ms Justice Fergus said she accepted the evidence from the defendants that the signs were affixed to the checkout for a considerable period of time and that Ms McDonagh had been reminded of the store’s policy on the use of baskets a number of times. She dismissed the case and awarded legal costs to the defendants.

Mr Feeney made no comment outside court after the cases were dismissed.