Driver is sued after swerving to avoid Phoenix Park deer 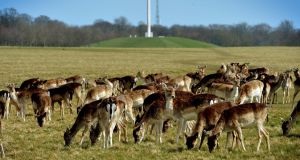 The driver crashed into a tree in Phoenix Park after the driver had successfully avoided a deer that had run across in front of him, the court heard. File image: David Sleator

A Polish national living in the UK, who swerved a hire car to miss a deer in Dublin’s Phoenix Park and crashed into a tree, is facing claims totalling €120,000 from members of his family who were passengers in the vehicle.

However, Mr Zmijewski and the car rental company he used are facing €60,000 claims by two other family members who were passengers in the car at the time, Adam Zmijewski and Ewa Korsun.

Mr English told Judge Terence O’Sullivan that Ms Glowacka (23) was one of four passengers in the car which had been hired on the morning of March 18th 2014 and a couple of hours later had crashed into a tree in Phoenix Park after the driver had successfully avoided a deer that had run across in front of him.

He said Mr Zmijewski had been driving the car at the time and his wife, Ms Glowacka, had been a rear seat passenger at the time. The car had overturned after having struck the tree.

Ms Glowacka, described as a picker/general operative, who did not turn up in court to pursue her case, had claimed she had suffered injuries to her neck and right shoulder and had been lying on the side of the road when an ambulance arrived.

For precautionary reasons she had been placed in full spinal immobilisation and taken to the emergency department of St James’s Hospital.

Mr Zmijewski, with a secondary address care of Allianz Insurance Company, Elm Park, Dublin, also did not appear in court and Mr English successfully applied for Ms Glowacka’s claim against her husband and the car rental company to be struck out with an order for legal costs against her.

Mr English told Judge O’Sullivan that the remaining two cases were still in the pipeline but his solicitors Crowley Millar would be seeking to have them struck out later this month for failure of the two claimants to reply to a request for specific particulars relating to their injuries.

Judge O’Sullivan, after adjourning the matter for some time to see if anyone would turn up, struck out Ms Glowacka’s claim and granted both defendants an order for costs against her.