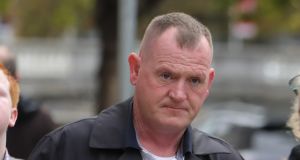 A judge told a male claimant not to refer to her as “love” during what was described as an exaggerated and unsuccessful €60,000 damages claim in the Circuit Civil Court.

James Flynn (46), a salesman at outdoor markets throughout Munster, kept addressing defence counsel Adrianne Fields as “love” but when he adopted the same approach with the court, Judge Sarah Berkeley told him: “Don’t call me love.”

When reprimanded by Judge Berkeley he made no such further references to the court and addressed Ms Fields thereafter as “lady”.

Ms Fields, who appeared with Fiona Mockler of Newman Solicitors, Dublin, for Mr Dundon, told the court liability was conceded in the case which had become an assessment of damages only.

Mr Flynn told the court that he was a passenger in a box van driven by his brother-in-law Michael O’Brien which had been reversed into by Dundon’s car at the toll plaza. Despite wearing his seat belt he had been slapped forward against the dash, injuring the left side of his neck and shoulder.

He said he suffered occasionally from loss of memory and gave various estimates of speeds between 40 to 70 miles an hour that the van may have been approaching the toll plaza when Mr Dundon reversed at speed into the front of the van as he “attempted to jump lanes”.

Mr Flynn said he had been taken to hospital by ambulance but had little memory of exactly how the accident or his injuries occurred. He could recall a loud bang when the vehicles collided and remembered hitting the dash.

Mr Flynn explained from the start of the case that he suffered from a serious ear infection which made him very hard of hearing and all participants in the case had agreed they would raise their voices so he could hear them.

When at one stage he said he was becoming frightened because he claimed Ms Fields was “roaring” at him, Judge Berkeley reassured him in a moderate voice that voices had to be raised so he could hear them.

“It appears you are hearing certain things without difficulty, may I add,” Judge Berkeley told him.

Ms Fields said Mr Dundon was conceding he had reversed into the front of Mr Flynn’s brother-in-law’s van but defence witnesses would be alleging the collision was a very minor tip of the bumpers.

During Ms Fields’ cross-examination about the accident and medical examinations, Mr Flynn referred on several occasions to his intermittent loss of memory and said he may not have heard or may have misunderstood questions put to him by a doctor examining him on behalf of the defendant.

He denied that a pain in the left side of his neck on the day of the accident had magically jumped to the right side when only recently examined by the defence doctor.

When an engineer for Mr Dundon played back a CCTV recording for Judge Berkeley of the vehicles slowly approaching the toll plaza and stopping, the judge directed it be considered by both Mr Flynn’s and Mr Dundon’s legal teams.

A very short time later counsel for Mr Flynn told Judge Berkeley that having viewed the CCTV footage and having spoken to Mr Flynn, his client had decided to withdraw his claim.

Judge Berkeley ordered that Mr Flynn pay the legal costs of the case. She said that while there was a reference to his hearing problem in his medical reports there had been no mention of any loss of memory. “The case having been withdrawn mid-trial, costs follow I’m afraid,” Judge Berkeley said.