Couple owing €8,550 in rent arrears claim they are ‘housed like pigs’ 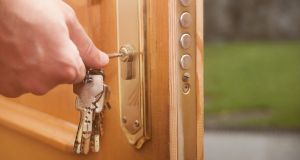 A couple who claimed they and their baby were being housed “like pigs,” were told Monday they have to quit their home in just under a fortnight.

Gorka Szablowska told the Circuit Civil Court he and his wife, Olga, were in dispute with their landlord about more than money.

“There is more to this than money,” he told Judge Jacqueline Linnane. ”It’s about the conditions we live in….like pigs, with a little baby.”

Barrister Una Cassidy, counsel for the Residential Tenancies Board, said the Board, on behalf of landlord Heremon O’Farrell, was seeking to enforce a six-month-old determination order directing the Szablowskas to pay rent arrears of €2,550 and continue paying their monthly rent payments of €850.

Ms Cassidy, who appeared with Eversheds Sutherland solicitors, told Judge Linnane that in accordance with the Board’s determination Mr and Mrs Szablowska had failed to pay any rent or give up possession of their apartment, The Rear Hall, 3 Eaton Place, Monkstown, Co Dublin.

Judge Linnane said she had dealt with the application for enforcement of the Board’s determination on a number of occasions and had read all the papers in the case. The unpaid rent had now reached €8,550.

The judge said that on August 9th last year the Board had made a determination for the payment of the €2,550 rent then outstanding and directed continued monthly payments of rent in the absence of which the Szablowskas were to have vacated the property.

“They have not paid any rent whatsoever since the adjudication and I am enforcing the determination of the Board,” Judge Linnane said.

She told the Szablowskas she was making an order directing that they and anyone else in occupation of the property were to vacate and deliver up possession within 10 days.

The judge also made an order against the Szablowskas for possession of the property and granted landlord Heremon O’Farrell a judgment against them jointly and severally for €8,550 together with costs of the application before the court.

Both the Szablowskas attended court and Mr Szablowska addressed the matter to the judge. He said his wife did not understand anything that Judge Linnane had said in her judgment and he had not understood all of it either.