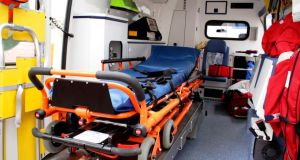 Ambulance driver Grzegorz Kolek (34) pleaded not guilty to dangerous driving on November 8th, 2012, claiming a fox ran out in front of him causing him to lose control and crash.

A ambulance driver charged with dangerous driving which caused the death of an elderly patient, claims a fox ran out in front of him causing him to lose control and crash into a ditch.

Prosecuting barrister, Conor Fahy, told the court an ambulance, owned by a private company and driven by the accused mounted a kerb and travelled for 21.5 metres along a ditch before hitting a speed sign, and then a telegraph pole before turning over on its side.

The accident, he said, occurred on a straight stretch of road near Ballindooley on the Headford Road, a mile from Galway city around 11.30am.

A medical report read to the jury stated Mrs Kelly, a patient from St Brendan’s Nursing Home in Mulranney, who was strapped onto a stretcher in the back of the ambulance at the time, subsequently died from complications arising from a brain haemorrhage she sustained in the collision and from other underlying conditions.

She was being transferred at the time of the accident to hospital in Galway for an outpatients’s checkup following treatment five months previously for skin cancer.

Kolek told Gardaí a fox ran out from the ditch on his left and he veered to the left and braked mildly. The ambulance, he said, veered to the left mounted the kerb and turned over after hitting the telegraph pole. Gardaí checked Kolek’s phone and found he had not been using it at the time.

Sergeant Pat Flanagan gave evidence he was driving towards Headford and saw the ambulance coming towards him that morning.

He said he did not see a fox and had to take evasive action himself when the ambulance came across to his side of the road after it hit the pole.

He said he was about 40 metres away when he saw the ambulance veer to its left.

White rhino calf weighing 50kg born at Dublin Zoo 12:23
Explosive device found outside Martin Finucane’s home 12:17
Social Democrats to abstain on all votes for taoiseach as Dáil resumes 12:13
Woman arrested over alleged threats to victim of rape 11:26
The 33rd Dáil convenes today: What can we expect? 11:25

1 Social Democrats to abstain on all votes for taoiseach as Dáil resumes
2 Gardaí investigating four-lane motorway sulky race
3 Two arrested in connection with murder of Keane Mulready-Woods
4 The 33rd Dáil convenes today: What can we expect?
5 Bloomberg attacked from all sides in heated Democratic debate
Real news has value SUBSCRIBE