Image of meeting between newborn and grandfather goes viral

‘I know my mam has cried a few times about not being able to hold him. It’s their first grandchild’ 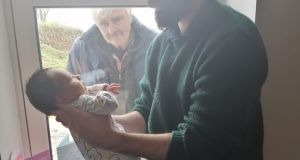 When Mícheál Ó Gallachóir’s wife Emma went into labour on Friday, March 13th, the shops were still open. There were still plenty of commuters on the roads and school children had only just discovered they were being sent home for two weeks.

When the couple emerged from Our Lady of Lourdes Hospital in Drogheda three days later with their newborn son Faolán they discovered an Ireland transformed by a pandemic.

The couple had already learned of new hospital restrictions on the Sunday when Ó Gallachóir was told he could only visit during certain hours. “All the new fathers were waiting outside the hospital like headless chickens. It was very stressful for Emma but she was lucky to be on a ward with other mums and the midwives were great.”

Before leaving the hospital, the couple were advised to sterilise their clothes as soon as they got home. “They told us to put them in a boil wash and not to have any visitors. The only person we’ve had in the house since then is the district nurse.”

Learning how to care for your first newborn baby without the support of family and friends is hugely challenging, admits Ó Gallachóir. “We do as much over WhatsApp as we can, sending photos and asking questions.”

Ó Gallachóir’s parents, who live two miles away from the couple’s home outside the village of Drumconrath in Co. Meath, have stopped by a couple of times to see their grandson through the window. “Looking back on it I realise it must have been tough for my parents. I know my mam has cried a few times about not being able to hold him. It’s their first grandchild.”

Last Thursday, Emma photographed her father-in-law Michael has he peered through the glass at his first grandchild.

The moving image, which Ó Gallachóir’s sister shared on Twitter, has been retweeted nearly 97,000 times with more than 724,000 likes. “It was sort of a shock when you see news articles about your family popping up in New Zealand and the US. We were taken aback, we couldn’t believe how quickly it went viral.”

Unfortunately, the couple had to return to hospital last weekend after Faolán’s temperature went up. “We thought he might have the virus and were sent to an A&E section dedicated to Covid-19. It was like something you’d see in a film; the entire place was sealed up and everyone was completely covered in scrubs and surgical masks.” After six hours in hospital the family was given the all clear and sent home.

The couple have been shown great kindness with friends and family leaving plenty of food and supplies on their doorstep. However, it’s difficult not to feel concerned about a small baby at this time. “In the back of your mind you’re thinking he’s only been around us, will he be able to build up an immune system? And on top of that, we have the same insecurities around our jobs. We keep wondering how long will this go on.”