A cadaver dog searching in Ravensdale Forest, Co Louth has alerted to the possible location of human remains, which campaigners believe may be the remains of British Army Captain Robert Nairac who was murdered by the IRA in 1977. 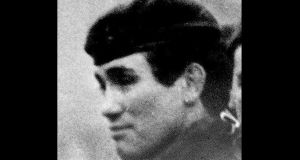 The commission responsible for locating the “disappeared” of the Troubles is to investigate a claim that the remains of British army captain Robert Nairac are buried in a wooded area of Co Louth.

On Tuesday, specialist dogs trained to locate human remains alerted their handler to a patch of ground in Ravensdale Forest, just over the Border from south Armagh.

The dogs and their handler were hired by Alan Barry, a former British army soldier and documentary maker, who has been trying to locate Capt Nairac’s remains.

The British army intelligence officer was abducted from a pub in Dromintee, Co Armagh and shot dead by the Provisional IRA on May 15th, 1977. He is one of the three remaining “disappeared”, a term used to refer to the 16 victims of republican paramilitaries who were abducted, murdered and buried in secret.

Mr Barry alerted the gardaí on Tuesday following the possible find and four local officers attended the scene. He also informed the Independent Commission for the Location of Victims’ Remains (ICLVR) which is responsible for locating the disappeared.

A spokesman for the commission confirmed receipt of the information and said it intends to send a forensic archaeologist to the site to conduct a preliminary investigation.

However this may take a number of weeks due to a shortage of such experts in Ireland, he told The Irish Times.

Earlier this year Mr Barry hired a psychic to help find Capt Nairac’s remains. He said this psychic brought him to the exact spot where the cadaver dogs later indicated human remains were buried. He told the commission of the psychic’s assertion several weeks ago but it declined to investigate. The commission has an unofficial but strict policy of not following up on tip-offs which come from psychics, mediums or similar sources.

A source stressed this week that the only reason it is following up the matter now is because of the results of the cadaver dog search. They said the information is being taken seriously but also cautioned against premature speculation that Capt Nairac’s remains will be located in the forest.

The cadaver dogs were trained and handled by Paul Murphy who trains dogs for the Civil Defence and US police forces. He said the dogs gave a “very, very, very strong indication” of human remains. One dog initially alerted something was buried at the spot. The second dog was then brought in and it alerted to the same spot, Mr Murphy said.

The dogs can detect decades-old remains and can differentiate between animals and humans.

As well as the psychic, Mr Barry said several other factors suggest the intelligence officer was buried in the area by the IRA. He said ordinance survey records show the area was not covered in mature forest in the late 1970s, making it more attractive as a burial site. Mr Barry said he also deployed “the Winthrop method”, a British army technique which teaches soldiers to think like terrorists when searching for weapons caches.

He expressed frustration that the commission did not act on his initial tip-off and that it is not immediately responding to the cadaver dog results. “They’re dragging their heels at every turn.”

Capt Nairac has long been accused of working with loyalist paramilitaries in several atrocities during the Troubles including the Dublin/Monaghan bombings, the Kingsmill massacre and the Miami Showband massacre

In a documentary on Capt Nairac made by Mr Barry and released earlier this year, a senior investigator with ICLVR said it disputed these accusations. Geoff Knupfer said records show Capt Nairac was in other locations during each of the atrocities. He also stated that the commission was satisfied that rumours suggesting Captain Nairac’s body was put through a meat processor were “entirely without foundation”.