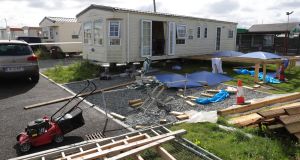 The scene on Wednesday morning at the Ashling Holiday Park, Clogherhead, where a man was shot dead. Photograph: Collins.

Gardaí investigating the shooting dead of a man in a caravan park in Co Louth yesterday have said it was not a drive by shooting but instead they said the gunman arrived and left the busy park in a red Lexus car.

At a press conference in Clogherhead, on Wednesday afternoon, gardaí confirmed the deceased was Keith Branigan (29) from Drogheda.

He was working on decking at the front of one of caravans at the holiday park when he was shot dead just before 2.50pm on Tuesday.

Garda Superintendent Andrew Watters, of Drogheda Garda station, said it was “a particularly indiscriminate and callous act carried out in a very busy caravan park. There were a lot of families, women with young children in particular close to the area of the shooting.”

“Indeed some of these children were enjoying the last days of the summer holidays, some were back to school today,” he added.

He then said, “I want to clarify that this was not a drive-by shooting.”

“From our investigation to date we are satisfied a red Lexus car 05 C 24473 entered the caravan park, the gunman approached the deceased and fired a number of shots at him.”

“A number of stray shots caused damage to two cars in the vicinity in the car park as well.”

“The gunman then returned to the red Lexus car and we are satisfied that car turned left when it left the caravan park and travelled in the direction of Termonfeckin. ”

An incident room has been established in Drogheda Garda station and the Superintendent said gardaí are following a number of lines of investigation.

Today he appealed for the public’s assistance in three areas.

“I wish to appeal to anybody in Clogherhead and surrounding areas who may have noticed any unusual behaviour in the 48 hours leading up to this shooting, and indeed in the immediate run up to 2.50pm yesterday, (such as) any unusual cars or people.”

In relation to the red Lexus, gardaí are trying to established the exact route it took before being found burnt out at Whiteriver, on the Dunleer to Clogherhead road.

“I am appealing to anybody with information on this car, or who may have seen the suspects abandoning this car to contact us.”

The suspects, believed to be at least two men, are then believed to have transferred to a black Toyota Avensis registration 04WH 8024.

It was later located in the Clonmore estate in Ardee and gardaí want to hear from anybody with information on that car or who saw from the time it was on the Collon to Dunleer road.

In relation to the reassuring people who are concerned about the safety of the public, Superintendent Watters said, “We have an operation in place in the Drogheda district to deal with serious organised crime.”

“I would like to reassure the public of Drogheda and surrounding areas, we made a number of very significant detections, arrests, prosecutions and we have people before the courts on some very serious charges and strict bail conditions.”

“I would like to reassure the public that that operation is ongoing. Indeed yesterday at the same time that this callous indiscriminate murder took place, we had four people detained in Drogheda Garda station for a serious arson attack which we classify as an attempted murder.”

He said he had received additional resources in Drogheda Garda Station in the last two months and also has the support of regional units and the armed support units as well as national units.

“I would like to reassure the public that every effort is being made to protect the people of Drogheda through this operation.”

Anyone with information on the shooting can contact Drogheda gardaí on 041-9874200 or the Garda Confidential Line 1800 666 111 or any Garda station or any Garda they know.