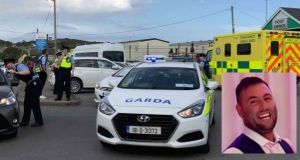 Gardaí fear a significant escalation in a gangland feud in Co Louth following the first murder in the year-long dispute.

Keith Branigan (29) was working on decking on a newly installed mobile home near Clogherhead on Tuesday afternoon when he was shot dead. Gardaí believe the killer was driven into the caravan park before getting out of the vehicle, firing the fatal shots and getting back into the car and escaping.

The shooting took place at Aisling Caravan Park close to a supermarket and post office on the Termonfeckin to Clogherhead road at about 2.50pm.

A number of bystanders who were in the area escaped injury. However, one of the gunman’s bullets ricocheted and hit a car that a woman and two children were in moments earlier.

Mr Branigan died almost instantly despite people close by rushing to his aid.

Gardaí in Drogheda immediately began a murder inquiry and urged the public to help.

Gardaí believe Mr Branigan was spotted working at the location by people who wanted him dead as part of the feud between drug-dealing factions in Drogheda.

Originally from Drogheda, Mr Branigan was close to a leading criminal in one of the gangs, which appeared to be gaining the upper hand on their rivals.

While the feud has resulted in bursts of extreme violence for the past 13 months and a number of men were shot and left with life-changing injuries, Tuesday’s attack was the first fatality in the dispute.

There are now fears within senior Garda management in the Louth division and in Garda Headquarters, Phoenix Park, Dublin, that the violence will escalate further.

In June, when a man was shot and seriously injured in an attack in Drogheda, the following hours saw tit-for-tat petrol-bomb attacks on houses linked to the attempted murder earlier in the day.

More than 70 feud incidents have been reported between the rival drug gangs since the dispute began with a gun attack in July 2018 that left a man paralysed.

Tuesday’s victim was a convicted criminal who had been well-known to gardaí for over a decade and had served two years in prison for a violent assault.

Garda resources had already been increased in the Louth division in direct response to the feud, with more recruits than usual being sent there after passing out from the Garda College, Templemore, earlier this year.

Armed checkpoints and armed patrols, as well as regular patrols by uniformed gardaí in marked Garda cars, had also been increased, although the feud has continued.