Case over release of file on Troubles killings deferred 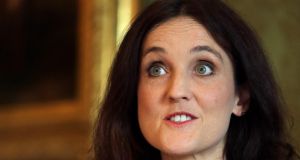 Inquest documents at the centre of an escalating disclosure dispute will remain under wraps until at least Thursday.

High Court undertaking were given as Northern Secretary Theresa Villiers’ legal bid to stop the release of documents relating to three decades-old killings was put on hold.

Lawyers for Ms Villiers and PSNI chief constable Matt Baggott secured a temporary injunction at the weekend to block circulation.

The documents are connected to three deaths stretching back more than 40 years. They include the British Army shooting of IRA man Paddy McAdorey in Belfast in 1971, the killing of student Michael Donnelly by a plastic bullet in 1980, and the loyalist murder of Sarah Larmour a year earlier. Ms Ni Chuilin’s department has responsibility for the Public Records Office where the papers are held.

Legal proceedings were issued amid concerns about the possible disclosure of any sensitive information on members of the security forces.

The plaintiffs want to be able to carry out a full review of the material being handed over. Following a late-night, ex-parte hearing injunctions were served on Relatives for Justice and KRW Law until the case was dealt with.

A full application was due to get underway at the High Court today, with all sides represented.

Attorney general John Larkin QC also attended to represent the department. However, it was instead agreed to adjourn the case until Thursday.

Barry Macdonald QC, for the defendants, said: “We do have concerns about the constitution of these proceedings.” He confirmed to Mr Justice Stephens that his clients would give undertakings to comply with the terms of the temporary order until then.

That prohibits any publication, dissemination or copying of the disputed documents. The judge also directed that recordings of Friday night’s hearing be prepared and subjected to any redaction requests before being given to the defendants. Outside the court solicitor Niall Murphy of KRW Law, representing the McAdorey family, expressed concern at the timing of the legal move.

He pointed out that the injunction prevents use of the material by next of kin seeking a fresh inquiry into the killing. Mr Murphy said: “The attempt by the Secretary of State and the Chief Constable to overturn the Minister’s decision is a major setback to the cause of seeking to ensure the State’s compliance with its positive obligations under Article 2 of the European Convention of Human Rights.

“We will do everything possible to resist this attempt to stop us doing our job.”