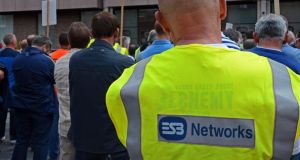 Four ESB employees, who began working with the company on varying dates since 1978, brought the actions last October alleging the ESB has wrongfully insisted the pension scheme is now a ‘defined contribution’ scheme, meaning what a person receives on retirement is no longer guaranteed. Photograph: Eric Luke/The Irish Times

A legal challenge by four ESB workers alleging the company had deliberatly failed to address a €1.7 billion deficit in the company’s pension scheme has been settled at the Commercial Court.

Mr Justice Peter Kelly was told today by Denis McDonald SC, for the ESB, the action could be struck out with no order.

No details of the agreement between the parties were disclosed but the settlement comes just days after an agreement was reached between the ESB and trade unions who had threatened strike action if pension scheme issues were not addressed.

Brian Baitson, William Flavin, Owen Kilmurray, and Margaret O’Connor, who began working with the ESB on varying dates since 1978, brought the actions last October alleging the ESB has wrongfully insisted the scheme is now a “defined contribution” scheme, meaning what a person receives on retirement is no longer guaranteed.

When the case was mentioned before Mr Justice Kelly last month, the scheme trustees indciated they wished to be joined to the workers’ case. On consent of the sides, the judge adjoured the trustees application to January but said he had noted a letter from the trustees which the ESB chief executive had failed to reply to.

The judge said ESB chief executive Pat O’Doherty should reply to that letter in which the trustees said it was “difficult to comprehend” proposals to pay a €400m dividend to the State when there was a €1.7bn deficit in the scheme and a serious risk to its future funding.

Mr Justice Kelly said it was “very unhelpful” that the letter, written on April 17th last by trustees’ chairman Tony Donnelly, had not been replied to and it would be helpful if Mr O’Doherty would do so.

In that letter, the trustees also asked the company to reconsider the proposal to pay the dividend “and to ensure the Government are aware of the significant regulatory deficit and risks to this fund and the company”.

Paul Sreenan SC, for the ESB, said there would be no difficulty about replying but he wanted to stress the trustees’ concerns had been noted and there were continuing contacts about the pensions issue. The ESB disputed the claims made about the extent of its scheme funding obligations and no decision had yet been made about payment of a special dividend, counsel added.

In his letter, Mr Donnelly said the ESB scheme was a defined benefit scheme subject to the minimum funding standard (MFS) prescribed under the Pensions Act and the scheme actuary had reported a MFS deficit of some €1.7bn at end 2011.

The Government’s proposed new regulations on pension schemes, including risk reserve requirements, would place “even greater funding strains on the scheme at the latest by 2019 and earlier if the current funding plan goes off track”, he said.

A 2010 Pensions Agreement had significantly reduced members’ benefits and committed the ESB to paying €591m to address the actuarial ongoing funding shortfall and derisking, he said.

While a revised funding plan approved in October 2012 remained on track, the scheme will continue to be vulnerable to volatile financial markets for the foreseeable future, the letter said. There was still “significant risk” the funding plan may go off track with serious consequences especially for members who have not yet reached retirement age and have no separate state pension provision.