Alcohol-related crime booms in Dublin as nightlife picks up 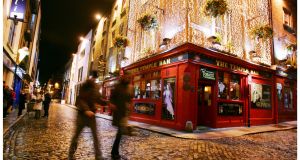 “We are going to be faced with the night-time economy again, as we were in 2008-2009.” Above, Temple Bar. Photograph: Bryan O’Brien

There has been a rise in alcohol-fuelled offending in Dublin as the city’s night-time economy returns to Celtic Tiger levels, the Garda officer in charge of policing in the capital has said.

Assistant Commissioner Pat Leahy said the number of gardaí on the “front line” of policing in Dublin was about 640 lower now than in 2011.

Some of the decrease was a result of Dublin-based members of the force joining armed units rolled out across the State to combat organised crime.

“It’s going to take some time,” he said of reversing the trend of reduced numbers. “I think we’ve hit the bottom and we’re just about turning.”

On the subject of busier nights on Dublin’s streets and the higher levels of public order issues and sometimes violent crime that come with it, Mr Leahy said the Garda was being tested.

He said drunkenness offences were 40 per cent higher this year, public-order crime had increased 14 per cent, crimes against the person had risen 8 per cent and minor assaults were up 10 per cent.

“The 40 per cent increase in drunkenness offences is probably reflective of what is taking place in the economy and what continues to take place,” he said.

“So we are going to be faced with the night-time economy again, as we were in 2008-2009. And [the Garda] is going to have to readjust for that coming into the not-so-distant future; that’s for sure.”

Sex offences were 4 per cent higher in the city this year, he told Dublin City Council’s joint policing committee.

Burglary offences nationally were up 4 per cent but decreased by 7 per cent in the Dublin region this year. Robbery from an establishment or institution is down 5 per cent and robbery from the person has decreased by 8 per cent.