Belfast prisoner charged with throwing cup of tea at dog 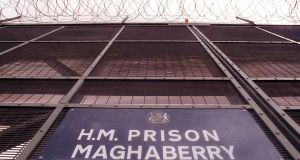 A Belfast man has been charged with causing suffering to a dog by throwing a cup of tea over it during disturbances at Maghaberry prison last year.

In addition to being charged with causing unnecessary suffering to the Alsatian dog on April 23rd, 2015, William John Mulholland (34) is accused of assaulting a prison officer and possessing a weapon, namely a ceramic cup, with intent to cause the officer grievous bodily harm.

Alongside Mulholland in the dock at Lisburn Magistrates Court was James Jelley (46), who was charged with arson inside the recreation room at Maghaberry prison and causing criminal damage to a TV, pool table and telephone on the same date.

No facts of the case were opened yesterday but previously the court heard the alleged offences took place during disturbances inside Ulster’s high-security prison when items were set on fire.

Mulholland is alleged to have thrown a cup of tea at the dog and his handler.