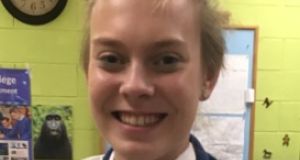 Ana Kriégel was found dead in a derelict farmhouse outside Lucan, Co Dublin, on May 14th, 2018.

The entirety of the case against the second boy accused of Ana Kriégel’s murder comes straight from his own mouth, the Central Criminal Court has been told.

In his closing address to the jury, prosecuting counsel Brendan Grehan SC said there was no forensic evidence against Boy B and the evidence against him comes from what he said during his Garda interviews.

The trial of the two boys accused of her murder has now reached its closing stages on Friday after the jury heard neither accused would be calling any defence witnesses.

The prosecution allege Boy B lured Ana from her home at 5pm on May 14th, 2018 on the pretence of meeting Boy A, who Ana was “interested” in. Boy A then allegedly violently sexually assaulted and murdered her in the derelict farmhouse as Boy B watched.

Counsel said he had “lost count” of the number of lies Boy B told about his involvement in the events leading up to Ana’s death.

He told the jury the boy is guilty of murder if he brought Ana to the farmhouse knowing that the intention was to kill her.

Boy B is a highly intelligent, highly articulate person, he said. He was highly composed when being questioned by gardaí and “not in the least bit intimidated by surrounds that would bring most of us to our knees.”

The court heard from one witness that Boy B was calm and collected in the days after Ana’s death, “like everyday,” counsel said. This is impression you would get from watching his videos of interview, he said.

Counsel rejected any idea the interviewing gardaí “interrogated” the boy after his arrest for Ana’s murder.

He said there was questioning and perseverance from the detectives and that they pleaded with Boy B to tell the truth. But they also showed “incredible restraint,” Mr Grehan said. “They don’t deserve medals for that, I’m just making the comment.”

Counsel highlighted Boy B’s “negative” comments about Ana made during his Garda interviews. He called her an outcast, a weirdo and somebody you wouldn’t want to be seen with.

“All these comments gave a certain indication of a view about Ana,” Mr Grehan said.

The boy’s lies started when gardaí called to his house the evening Ana went missing when he told them he had seen Ana in the park but didn’t mention Boy A, counsel said.

“Bit by bit the truth seeped out,” he said. “Boy B had played a far bigger part in this that he seeks to let on.”

Referring to evidence heard about a “satanic club” set up by Boy B, counsel said its relevance is a matter for the jury. Boy B told gardaí in interview it was actually a homework club and he called it a satanic club because he didn’t want certain people to join.

Mr Grehan said he thought one of the rules of the club instructing members not to talk about it might be relevant.

Outlining the case against Boy A, counsel said Ana was extremely happy to meet him that day.

He said Ana “craved friendship”. This made her very vulnerable to someone who wanted to take advantage of it.

This was the reason the jury heard evidence of Ana’s loneliness at the beginning of the trial, Mr Grehan said.

Boy A knew Ana liked him because she had expressed an interest in him at the beginning of the school year. When Boy B called for her on May 14th on behalf of Boy A she was happy, counsel said.

“The source of the happiness was that he said (Boy A) wanted to see her. It must have seemed like all her dreams came true.”

Counsel said she “bounded” out of the house and didn’t even bring her blue headphones which she brought everywhere.

Mr Grehan replayed a large amount of CCTV evidence to the jury which he said contradicted the accounts given to gardaí by both accused.

Boy A had told gardaí he met Ana in St Catherine’s Park and told her he didn’t want to go out with her. Counsel said the CCTV suggests he was already in the derelict house or near to it when Boy B and Ana were still walking across the park.

The evidence showed Ana fought back against her killer and that Boy A had several injuries. There is no evidence to support his “elaborate” claim that he suffered these injuries after being attacked by two men the park.

Mr Grehan detailed what he said was the “overwhelming” forensic case against Boy A. Ana’s blood was found on nine areas of Boy A’s boots indicating he either assaulted her or was in very close proximity when she was assaulted.

Boy A’s semen was found on her top which was found in the derelict house. A boot-print similar to the boots he wore was also found on the top.

DNA matching Boy A was found on the insulation tap wrapped around Ana’s neck.

Referring to pictures on Boy A’s phone showing an interest in horror films and “gruesome torture methods in history”, counsel said this is a matter for the jury. He said perhaps many young boys watch such things. Counsel also noted his interest in abandoned places.

When confronted by a statement from Boy B contradicting his version of events, Boy A responded that he was lying. Counsel compared this to a child being caught with chocolate over their face continuing to lie about eating the biscuits.

All of these factors, counsel said, establish “that (Boy A) murdered Ana Kriégel and that she was sexually assaulted in the course of this.”

Mr Grehan told the jury it could discount “out of hand” any notion that she engaged in consensual sexual activity “on the dark, dirty floor of Glenwood house in tiniest of time-frames.”

“There is no suggestion that Ana simply succumbed to some overture,” he said. “She fought for her life.”

Neither of the two boys accused of the murder of the 14 year old have called evidence in their own defence.

On Monday the jury will hear closing speeches from both defence counsel.

This will be followed early next week by a lengthy address from Mr Justice Paul McDermott after which the jury of eight men and four women will be asked to begin deliberations.